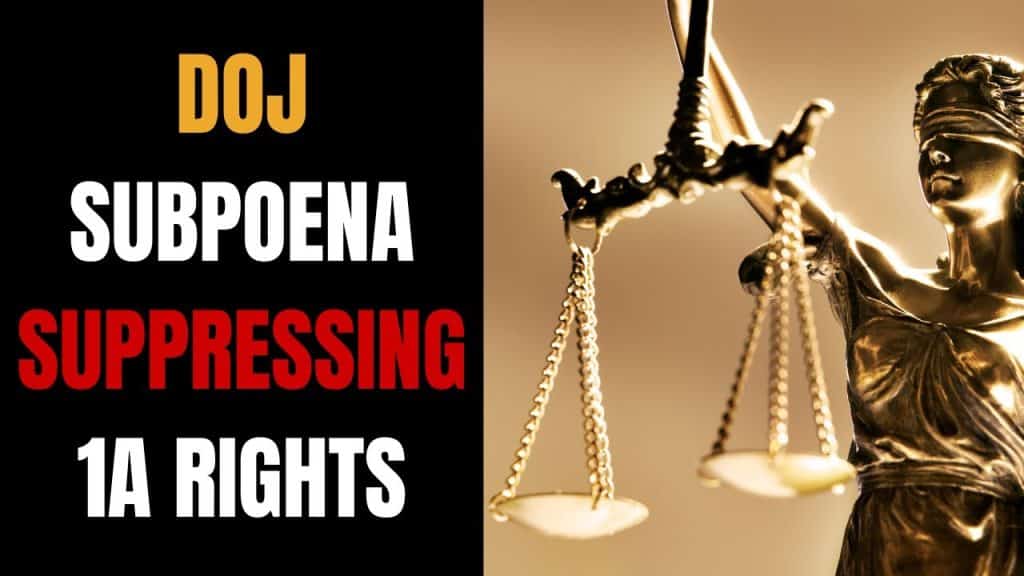 The Biden Department of Justice just unleashed its political subpoena power in the state of Alabama, and no one should be surprised that a conservative group has come in their crosshairs – all because they had the temerity to urge the state legislature to pass a law stopping the use of puberty blockers on minors.

Eagle Forum of Alabama (EFA) has worked hard over the past three years encouraging the Alabama state legislature to pass legislation blocking the distribution of puberty blockers to children, and after seven separate legislative hearings, long and loud public debate, intense media coverage and an intervening election in 2020, they finally succeeded.

The response by opponents was swift and constitutional, they filed a federal lawsuit urging the Court to find the legislation unconstitutional.  Not surprisingly, the Biden Justice Department announced that they would be joining the law’s opponents in the lawsuit as was their right.

What was surprising is the subpoena the EFA received on August 9, 2022 demanding all information related to the non-profit’s legislative activities promoting the Alabama Vulnerable Child Compassion And Protection Act (VCAP) since 2017.

In an exclusive interview with Americans for Limited Government, EFA Executive Director Becky Gerritson made clear that the subpoena was “impossible” to fulfill as it demanded five-year of information with a demand for every piece of paper and communication on the legislation including drafts.

Mrs. Gerritson’s affidavit to the Court made public today makes this point asserting, “Eagle Forum of Alabama is not a party in this legal action. The DOJ subpoena is broad, intrusive, and meant to harass. It seeks 5 ½ years of information, including: all private communications with legislators or anyone else regarding VCAP; every note, meeting-minutes, letter, policy goals and strategy effort, speech, presentation materials, research, polling; drafts of the bill or its amendments (which can be found on the legislative website); and documents pertaining to publicly-posted social media and webpages, etc.”

But the bigger issue, beyond the perjury trap set by the Justice Department letter where any scrap of paper discovered that had not been provided could be used as evidence of perjury, is the profound chilling effect the subpoena has on the First Amendment right to petition your government.

For those at the Department of Justice who might be reading this, as a refresher, the First Amendment to the US Constitution states, “Congress shall make no law respecting an establishment of religion, or prohibiting the free exercise thereof; or abridging the freedom of speech, or of the press; or the right of the people peaceably to assemble, and to petition the Government for a redress of grievances.”

It is that nasty little inclusion at the end of the amendment that apparently doesn’t get taught in the finest Ivy League Law Schools, “and to petition the Government for a redress of grievances.”

In spite of the Biden attack on dissent to his government policies last week, the U.S. Constitution still exists and as it was designed to do, serve as a protection against an avaricious government seeking to impose its will on the people of the United States.

There can be no doubt to the intent of the subpoena, it was to intimidate and punish the Eagle Forum of Alabama and every other conservative group in the country from vigorously participating in the political arena.  After all, how dare those flyover MAGA people push legislation that offends the sensibilities of the fashionable crowd in power.

This is why this case on whether the Biden Justice Department has the legal authority to attempt to ruin a small, but powerful group for legally petitioning their government in Alabama, goes to the heart of our very Constitutional right as the governed.  Whether you are on the left or right, this blatant attempt at legal intimidation, should scare you, because if they can do it to one group, they can do it to all groups.

As Eagle Forum of Alabama’s response warns, “This should cause every single advocacy group or individual in America engaged in the legislative process to pause and consider the potential ramifications if any part of this subpoena is allowed to stand.”

By the way, as a side note, if Becky Gerritson’s name sounds familiar it is because she was one of the leaders who pushed back and won against the Obama administration’s attempt to use the IRS to take down legally constituted tea party groups.

I think the Justice Department is going to wish they picked on someone else in this fight.

This post, Biden DOJ Attacks First Amendment Right to Petition Government in Alabama, was originally published on The Daily Torch and is republished here with permission. Please support their efforts.