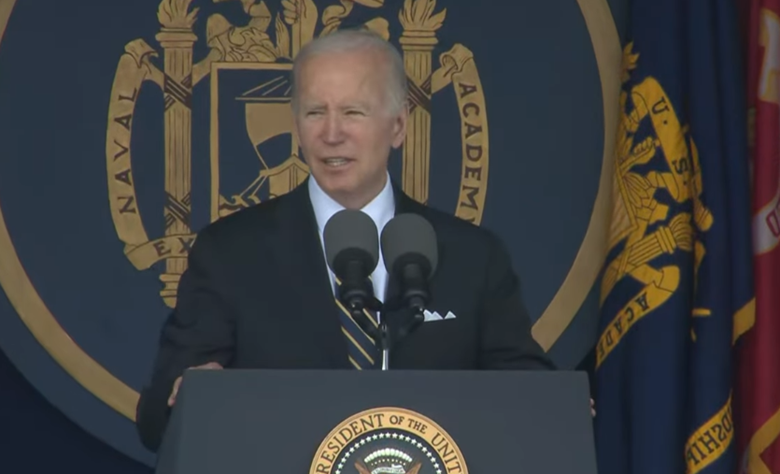 “Over the past few years, we’ve seen how interconnected the world is.  The deadly pandemic has impacted not just our own schooling, but almost every aspect of our lives — impacts of disruptions to the global supply chain causing significant inflation; accelerating the climate crisis that’s leading to rising seas and more severe weather patterns … around the globe.”

That was President Joe Biden on May 28 at the U.S. Naval Academy Commencement Address, claiming that, somehow, the pandemic accelerated the climate “crisis”? Huh?

Even Joe Biden’s disbanded Disinformation Governance Board would know this is fake news.

The United States Environmental Protection Agency reported that in 2020, while our nation was in the throes of the shutdowns, that greenhouse gas “[e]missions decreased from 2019 to 2020 by 11 percent.”  The EPA went on to report that the “primary driver for the decrease was an 11 percent decrease in CO2 emissions from fossil fuel combustion. This decrease was primarily due to a 13 percent decrease in transportation emissions driven by decreased demand due to the on-going COVID-19 pandemic.”

All according to a report issued by Joe Biden’s appointees at the radically green EPA.

This decline in emissions should have had the impact of moving the clock back a few years as the projected exponential growth had been halted and reversed, but instead in Biden’s world, “the climate crisis accelerated”.

Biden’s EPA provided another startling revelation in their report — “greenhouse gas emissions in 2020 (after accounting for sequestration from the land sector) were 21 percent below 2005 levels.”

21 percent below 2005 levels?  As in lower than 2005?  How can this be?  Joe Biden warned our graduating naval warfighters that oceans are rising and cataclysm is everywhere due to the accelerating climate crisis.

However, let’s assume that this wasn’t a colossal Biden gaffe. Think of the ramifications.  An accelerating climate “crisis” after the massive disruptions of 2020 can only mean that the disruption planned due to the transition to the Biden-Alexandria Ocasio-Cortez Green New Deal economy would have to make 2020 seem like the good old days. The transition that Biden proclaims is one of increased government dependency, less mobility, scarcity and lower standards of living due to rising prices — not oceans.

Somehow I missed that part of the Build Back Better brochure.

If tackling the “climate crisis” was really his objective, the President would be embracing fossil fuel development and hydraulic fracturing, particularly as it related to natural gas development. For decades, due to environmentalist lobbying, many of our nation’s bus systems run on clean burning natural gas.

Yet, the very solution that good little environmentalists, like the Sierra Club, vigorously supported way back in the ancient days of the Obama administration as it aggressively regulated coal power plants out of existence was not good enough. It was a solution that elegantly forced scarcity, foreign dependency, higher prices and energy use restrictions as America was not natural gas production independent.

And next thing you know, ole Jed was a millionaire, as hydraulic fracturing became more and more cost effective through innovation after innovation, it unleashed a torrent of natural gas (and oil) that made the U.S., the Saudi Arabia of natural gas and made the United States energy independent.

But abundance of oil and natural gas wasn’t the goal under Obama or under Biden today.  The goal is control and transitioning a scarcity driven economy away from markets and into constant supply and cost crises.

Sometimes, when Biden says stuff that makes shake your head in disbelief, it is wise to look around the corner at what he is probably actually thinking.

This post, Biden falsely claimed Covid pandemic ‘accelerated climate crisis’ even though carbon emissions decreased by 11 percent in 2020, was originally published on The Daily Torch and is republished here with permission. Please support their efforts.