Biden is right, we need to ‘boost the productive capacity’ of oil and gas in the U.S. So, why isn’t he doing it? 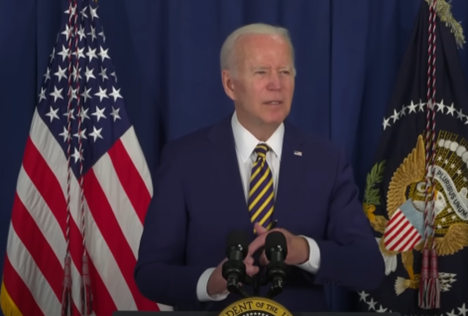 In his Wall Street Journal op-ed “My Plan for Fighting Inflation,” President Joe Biden promised to boost American energy production: “We need to take every practical step to make things more affordable for families during this moment of economic uncertainty—and to boost the productive capacity of our economy over time.”

Biden is right, we need to boost production. So why isn’t he doing it? In fact, U.S. crude oil refinery input is still lower today than pre-Covid times. According to the EIA, the gross input of atmospheric crude oil distillation units in so far in 2022 has averaged 15.67 million barrels per day. Compare that to the 16.99 million barrels per day in 2019, or the 17.3 million barrels per day in 2018 under Trump before the pandemic in 2020 when oil prices briefly went to zero and global production ground to a halt. That’s a 9.4 percent decrease in input when comparing 2022 with 2018. Considering there was no energy crisis in 2018, but that there certain is one in 2022, it is reasonable to expect President Biden to create conditions to increase domestic input when he is the one who decided to ban oil imports from Russia, a country that once sold America roughly 8 percent of the U.S. petroleum supply.

As a result, the national average gas price has reached an all-time high of $4.85 per gallon. At the same time, diesel, a major factor in consumer goods inflationary costs, has also hit an all-time high of $5.64 per gallon. Biden’s announcement with the International Energy Agency about releasing 60 million barrels of oil doesn’t do much considering America consumes about 20 million barrels per day.

First, Biden’s Department of Interior restricted their oil and gas lease sales after a “robust environmental review, engagement with Tribes and communities, and prioritizing the American people’s broad interests in public lands,” resulting in an “80 percent reduction from the acreage originally nominated” from “646 parcels on roughly 733,000 acres that had been previously nominated for leasing by energy companies”, and “the final sale notices will offer approximately 173 parcels on roughly 144,000 acres.”

Next, the Department of Interior decided to cancel the sale of Alaskan and Gulf Coast oil and gas leases altogether, citing a lack of interest for canceling the Alaskan sale, and blaming the Gulf slowdown on a federal court ruling against the Biden administration metric for allowing federal oil leases on the basis of global and societal costs of carbon emissions. The American Petroleum Institute estimates that this interruption could cost nearly 500,000 barrels of oil and natural gas per day between 2022 and 2040. By 2036, it could 885,000 fewer barrels of oil and natural gas per day. That’s a 33 percent decrease of where production would be with the leasing program in place and on schedule.

In short, continuing offshore drilling is a “practical step to make things more affordable for families”, but the Biden administration chose to not renew this routine 5-year leasing program. It has been the norm since 1980, but and is required by law, but nonetheless the Department of Interior canceled the sale.

Making matters worse, the Biden administration is also taking actions that reduce the net crude oil refining capacity of America. The Environmental Protection Agency (EPA) on June 3 issued new biofuel blending mandates for this year and the previous two years. The proposal was originally made in December, but now the standard has been formally issued. The EPA in December proposed to set volumes for 2022 at 20.77 billion gallons, for 2021 at 18.52 billion and for 2020 at 17.13 billion.

This would be less consequential if small refineries were exempted from such high volumes, but the EPA has denied all 69 petitions for exemption. In a statement to Reuters, EPA spokesperson Tim Carroll said the following. “Together, these actions reflect the Biden administration’s commitment to reset and strengthen the RFS (U.S. Renewable Fuel Standard), bolster our nation’s energy security and support homegrown biofuel alternatives to oil for transportation fuel.”

Yet most refineries do not blend fuel. Smaller refineries could be purely focused on processing crude oil, but the government will require them to shift their focus to ethanol biofuel blends. Generally, refineries are forced to buy RIN (Renewable Identification Number) credits to participate in production at all.

Unfortunately, just as energy prices are skyrocketing amid a production lag, RIN credits are surging in price in 2022. The average cost increase has been 10 percent, but the credits for diesel have shot up 33 percent. This is a major financial disincentive that will almost certainly result in a net loss of raw refinery power in America as refineries simply cannot turn a profit paying for these credits to and to have their fuel blended. The ones that can afford the credits and blending pass the costs on to the end consumer at the pump. Refineries need to be able to refine without being penalized.

Lastly, Congressional Democrats are proposing raising taxes on Made-in-America oil and gas by $145 billion. This will be through a combination of eliminating current credits and deductions, increasing existing tax rates, and restoring previous taxes that do not currently exist. There is no conceivable way that this will “make things more affordable for families”.

Even if the abovementioned tax increase does not come to fruition, Biden’s Department of Interior unfortunate decision to intentionally delay the routine renewal of a 40-year gas and oil lease program, and arbitrarily penalizing oil refineries for doing their jobs, neither boosts “the productive capacity of our economy over time” nor makes “things more affordable for families”. Instead, Biden appears to be taking impractical, counter steps that result in higher fuel prices for families.

The post Biden is right, we need to ‘boost the productive capacity’ of oil and gas in the U.S. So, why isn’t he doing it? appeared first on Daily Torch.

This post, Biden is right, we need to ‘boost the productive capacity’ of oil and gas in the U.S. So, why isn’t he doing it?, was originally published on The Daily Torch and is republished here with permission. Please support their efforts.