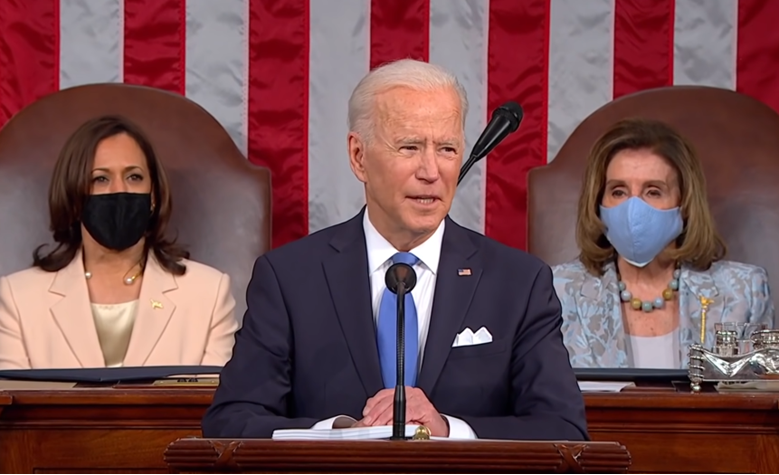 Republicans are building on their lead in the 2022 Congressional midterms, leading the generic ballot polls by 3.9 percent, 47.3 percent to 43.4 percent, according to the latest average of polls compiled by RealClearPolitics.com.

Currently, Democrats only have a net five-seat majority in the House of Representatives right now: 222 to 212, with one seat vacant. That is, if Democrats lose five or more seats in the House in the 2022 midterms, Republicans will reclaim the House.

Similarly, the Senate is tied 50 to 50, with Vice President Kamala Harris casting the tie-breaking vote for Democrats. There, Republicans need only pick up one seat on a net basis this year and they’ll be in the majority there, too.

Normally, in midterm elections dating back to 1906 through 2018, the party that occupies the White House usually loses on average 31 seats in the House, and about three seats in the Senate. If that happens, Republicans will easily reclaim Congress this year, given Biden and Democrats’ super slim majorities.

And House Speaker Nancy Pelosi (D-Calif.) and Senate Majority Leader Chuck Schumer (D-N.Y.) know it. That is why for the past year, they have been working feverishly to pass legislation that would nationalize federal election laws, gut state voter identification laws, raise taxes and to spend trillions of dollars we don’t have — until they couldn’t.

After passing a $1.9 trillion stimulus and then another $550 billion of new spending for infrastructure, with inflation already running hot at 7 percent and the U.S. economy potentially overheating — the spread between 10-year treasuries and 2-year treasuries is hovering at about 0.62 percent as of this writing — relatively moderate Democrats like Senators Joe Manchin (D-W.Va.) and Kyrsten Sinema (D-Ariz.) are unwilling to spend much more.

Most recently, when Manchin was asked about the $3.2 trillion so-called Build Back Better legislation that the Biden administration has been pursuing, Manchin told CNN, “What Build Back Better bill? There is no, I mean, I don’t know what you all are talking about… No, no, no, it’s dead… If they’re talking about the whole big package, that’s gone.”

And that was on legislation that would have been passed through on a simply 51-vote majority in the Senate via budget reconciliation. So, the spending bill is dead.

And so are any proposal that would have required a bipartisan, 60-vote supermajority to invoke cloture. For example, the election law bill, plans to pack the Supreme Court, legislation grant D.C. and Puerto Rico statehood, a health care public option and the Green New Deal.

Manchin and Sinema are unwilling to abolish to the filibuster, arguing that when Republicans were back in power, they would be able to use the tool to abolish laws that Democrats like.

At this point, it’s questionable whether Democrats even have the votes to, for example, repeal any of the tax cuts that were put into place by former President Donald Trump in 2017. They don’t even seem to have to votes to bring back the State and Local Tax (SALT) Deduction.

Meaning, just one year into his presidency, Biden’s legislative agenda is already dead. And, barring a dramatic turnaround, that may end up being true for the rest of his presidency, even if he should go on to win reelection. Why?

So, for Biden, it could be now or never to make law. But with his own average approval at about 41 percent, he may have already squandered his opportunity to make the most of his presidency. Too bad.

A version of this article appears at algresearch.org.

This post, Biden legislative agenda dead as GOP leads Democrats in Congressional midterms generic ballot by 4 points, was originally published on The Daily Torch and is republished here with permission. Please support their efforts.