Biden’s 2030 net zero carbon goals are delusional, and forcing Americans to play along is cruel 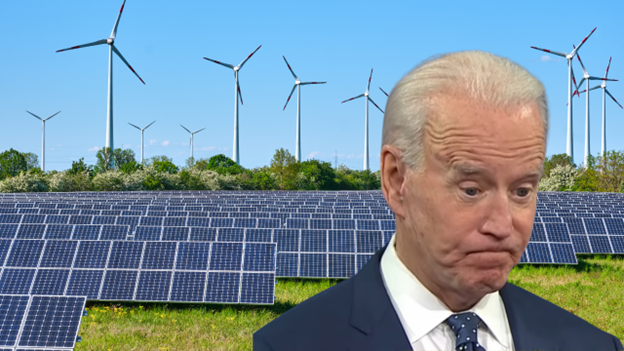 In December of 2021, President Joe Biden signed the Executive Order on Catalyzing Clean Energy Industries and Jobs Through Federal Sustainability that set a goal to have net-zero carbon emissions from electricity by 2030. It is unrealistic and delusional.

The infrastructural manufacturing costs are too high for sufficient scale of near-universal adaption in America and will remain so for quite some time. In 2020, solar, wind and hydro electricity only accounted for 19.8 percent of electricity generation domestically and 11.2 percent globally. The domestic figure is only expected to rise to 41 percent by 2050, while carbon-based natural gas and coal will reman more than 44 percent of the electricity grid through 2050, let alone 2030, according to the Energy Information Administration (EIA).

As a result, the Biden plan relies on unproven carbon sequestration technology on a massive scale, which Stanford University professor M.Z. Jacobson in a 2020 paper wrote “Neither coal nor natural gas with carbon capture is remotely close to zero carbon. Based on data, they reduce only ~10.8% carbon equivalent emissions (CO 2 e) over a 20-year time frame and ~20% over a 100-year time frame.”

As 52 percent of Americans say rising gasoline prices have caused financial hardship for their families, Biden’s anti-fossil fuel policies, which stems from his green energy ambitions, is damaging the United States economy by unnecessarily making transportation costs burdensome for citizens.

Beyond that, there are two significant hurdles to overcome to get anywhere close to Biden’s objectives.

First, and critically, practical, renewable energy requires sufficient storage in the form of an electrical battery. Solar and wind are almost entirely impractical without energy storage capabilities. In terms of overall renewable energy production in the United States, wind has already surpassed hydroelectric. That gap is expected to increase. Additionally, solar energy production as a global share has recently surpassed wind. Given current trends the International Renewable Energy Agency expects solar and wind to be the dominate renewables of future decades.

Although batteries are not a significant component of hydroelectric energy generation, as a global share of total production, hydroelectric will steadily decline over the coming decades. This is due to the unique geographical specifications required for hydroelectric renewable energy in addition to it have its own environmental risks.

Given that future renewables will be dependent upon sufficient electrical batteries, the cost of those batteries will determine the cost of renewable energy itself. For utility-scale batteries, the National Renewable Energy Laboratory (NREL) makes three projections about the cost of electrical energy storage (battery capacity costs) for the possibility of varying market conditions. Their projections for storage costs per kilowatt hour (kWh) are $143/kWh, $198/kWh, and $248/kWh in the year 2030.

The Massachusetts Institute of Technology published research regarding the required price of energy storage for universal adaption feasibility.  “We estimate that cost-competitively meeting baseload demand 100% of the time requires storage energy capacity costs below $20/kWh. If other sources meet demand 5% of the time, electricity costs fall and the energy capacity cost target rises to $150/kWh.”

With the magic number being $150 per kWh, achieving 95% renewable energy would be great, but the NREL’s most optimistic projection of $143 per kWh is unlikely due to the persistent global supply chain issues and significant changes in U.S.-China trade relations recently. Given that the required rare earth metals for electric batteries are largely in China, it seeds doubt that energy storage costs will be sufficiently low for mass adaption in time for Biden’s 2030 goals.

This energy storage cost is every bit as relevant to achieving scale with electrical vehicles as it is to powering homes with wind and solar. This impacts Biden’s 2030 emissions goal and will likely make it impossible.

Secondly, and perhaps more challenging, is that the success of Biden’s energy goals is dependent upon building a significantly larger, complex, and robust supply chain. That supply chain does not yet exist, and due to its complexity, may take decades.

Renewable energy supply chain construction, physical infrastructure, and raw materials (i.e. mining facilities, manufacturing plants, solar panels, thermal-solar panels, and wind turbines) will likely not reach sufficient economies of scale for near universal adoption for another 20 to 30 years. Regarding the lack of profitability in the industry, in an interview with the Daily Caller, Dan Kish, a senior fellow at the Institute for Energy Research stated that “the whole thing has been sort of a government created industry, from the get go”. This leads to questions about long-term industry sustainability should the subsidies dry up.

Rivian is an electrical vehicle manufacturer and competitor with Tesla. Speaking to the Wall Street Journal, Rivian’s CEO RJ Scaringe said the world was nowhere near producing enough electric car batteries: “Put very simply, all the world’s cell production combined represents well under 10% of what we will need in 10 years, meaning, 90% to 95% of the supply chain does not exist.”

Jesse Jenkins, a Princeton researcher and co-author of a study titled Net Zero America said the following regarding construction of the necessary infrastructure to meet Biden’s goals: “The current power grid took 150 years to build. Now, to get to net-zero emissions by 2050, we must build that amount of transmission again in the next 15 years and then build that much more again in the 15 years after that”. This sounds like a near impossible engineering feat. The Global Wind Energy Council also reports that they’re falling well short of their goals over the next decade.

Notwithstanding the economic and manufacturing hurdles mentioned above, renewables have unresolved ethical and ecological issues.

For example, 45 percent of the global supply of polysilicon, an ingredient required to manufacture solar panels, comes from China’s Xinjiang region, which is notorious for human rights violations and forced labor of the Uyghur population. The Department of States reports that entire communities have disappeared as a result.

Additionally, more than 40,000 child workers, as young as six-years-old, are estimated to work in cobalt mines located in Democratic Republic of the Congo according to Amnesty International. Exotic bird populations are declining in California due to them dying at wind and solar facilities. Nickel mining in an ancient forest in the Philippines is disrupting local ecosystems. The list goes on.

Biden’s obsession with achieving renewables now is harmful. While it’s true that oil companies taken over by woke investors share a portion of the blame by holding back production, Biden seems unaffected by the consequences of his anti-fossil fuel policies. American families undergoing hardships due to transportation costs are not on his radar. He has attempted sneaky administrative tricks like assessing the “social costs” of carbon emissions to increase the cost of doing business in the oil industry. Biden has ignored offers of assistance to boost oil production from other oil company CEOs after the war in Ukraine disrupted the world’s oil trade as sanctions were levied on Russia.

Biden can wish America to one day exclusively use renewable energy all he wants, but it will not make his net zero carbon goals any less delusional. He should be realistic about where the country and world truly is in that transition, which is to say not very far. Instead, the U.S. is killing the American energy market — consisting of reliable and abundant fossil fuels — to force feed an energy market that’s infantile and currently exclusive to the wealthy. Americans deserve better.

The post Biden’s 2030 net zero carbon goals are delusional, and forcing Americans to play along is cruel appeared first on Daily Torch.

This post, Biden’s 2030 net zero carbon goals are delusional, and forcing Americans to play along is cruel, was originally published on The Daily Torch and is republished here with permission. Please support their efforts.