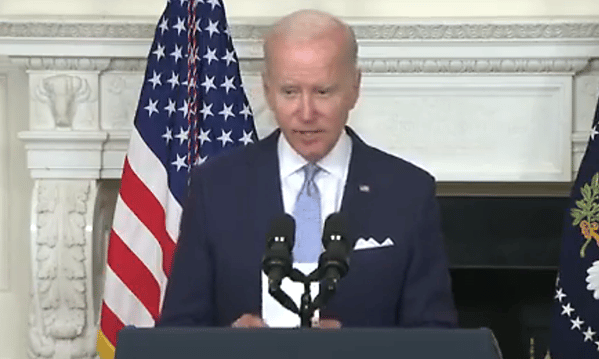 That was President Joe Biden on July 28, right before he rushed away from reporters who likely had questions about the 0.9 percent contraction annualized of the Gross Domestic Product (GDP) in the second quarter reported by the Bureau of Economic Analysis (BEA). Following a similar 1.6 percent decline in the first quarter, and the American people and Congress are rapidly preparing themselves for a recession, financially, and politically, respectively.

The numbers are little surprise. Nominal GDP, prior to adjusting for inflation, grew at a 7.8 percent annualized clip at the same time consumer inflation reported by the Bureau of Labor Statistics (BLS) was at 9.1 percent the last twelve months (although BEA uses its own metric for evaluating prices). When the economic overheats like it is now, it’s almost impossible for the economy to grow in a real, that is, inflation-adjusted sense.

Just like your incomes, with real average hourly earnings contracting 3.6 percent the past twelve months in June, according to BLS. The pain of inflation is felt by Americans everywhere so much that it caused the economy to fall backwards as incomes were eaten into by a torrent of $6 trillion of helicopter money from the federal government plus the consequential production slowdown all in response to Covid.

Remember all the checks, child tax credits and unemployment extensions in 2020 and 2021 when the economy was flat on its back and millions of jobs were lost to the Covid lockdowns? You’re paying for them now.

Naturally, with the economy falling into what might otherwise be a mild recession, Congress led by House Speaker Nancy Pelosi (D-Calif.) and Senate Majority Leader Chuck Schumer (D-N.Y.) are back with President Biden’s $370 billion Build Back Better cacophony of green subsidies and $327 billion of class warfare tax hikes — now the Orwellian-titled Inflation Reduction Act — aimed at higher earners and producers.

Just as too much spending from 2020 and 2021 can impose penalties on economic growth, so too will the continued misallocation of resources to the green energy sector at the expense of carbon energy and tax increases, which will be passed onto consumers.

And the 15 percent corporate minimum tax would hurt manufacturing, complains the Wall Street Journal editorial board: “Evidence is emerging that the new Schumer-Manchin 15% minimum tax on corporate-book income is especially harmful to U.S. manufacturing firms. An analysis by Congress’s Joint Committee on Taxation (JCT), which is hardly a nest of supply-siders, found that 49.7% of the tax would hit U.S. manufacturers.” Whatever happened to Biden’s plans to increase production to offset the global supply crisis that caused the inflation in the first place?

In this case, Biden wants to tax carbon energy production and U.S. manufacturing, and continue the green transformation of the American economy via stakeholder-driven corporatism, strangling supply chains and driving up costs even more at the very moment when Americans are struggling the most to keep their household budgets in check. That sounds like a recession, Mr. President.

This post, Biden’s carbon taxes, green subsidies and manufacturing tax hikes sound like a recession, was originally published on The Daily Torch and is republished here with permission. Please support their efforts.