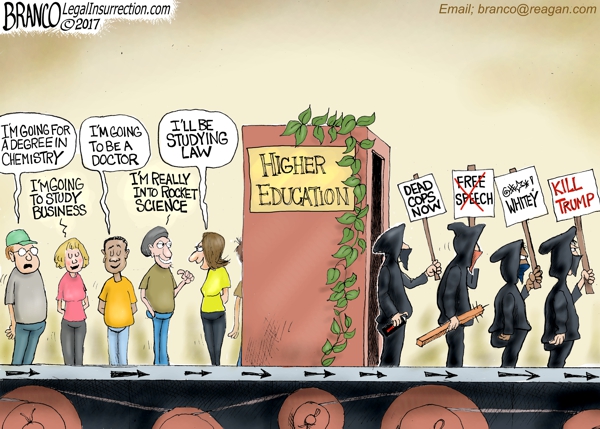 What to do about student loan debt? With all the problems swirling in the world, this question seems to be at the top of the minds of Biden administration officials.  Trying to get the most political benefit with the least amount of blowback from this federal government created ‘crisis’ seems to be leading Biden toward a needs based system for determining who has to repay their debt and who doesn’t.

The reason this issue is at the fore is because during the COVID shutdown, President Donald Trump and Congress put these federal student loans, and others, into administrative forebearance while lowering their interest rates to zero percent.

Now, every few months, the Biden administration extends the moratorium from repayment of federally-held student loan debt while promising some permanent elimination of that debt.

The obvious solution is to not absolve any student loan debt. It cannot be avoided that adults, in the guise of students but legal adults nonetheless, willingly took on debt to pay for something they wanted and it is their responsibility to repay that debt.

When someone takes out a loan to purchase a car, they get physical possession of that vehicle which they expect to function as designed and not constantly break down right after they drive it off the showroom floor.  They accept the responsibility of paying the bank back, but the car dealership has the accountability to fix the vehicle if it fails due to a defect. If things get really bad, some states have lemon laws which requires the dealership to accept the failed vehicle back with the customer getting their money back.

This would be manifestly unfair to those who repaid their student loan debt, but also to those who either did not go to college or did not take student debt while in college. But the left’s policy of benefitting Biff and Buffy at the expense of Bubba and Bobbi Jean should come as no surprise to those who have paid attention to the coastal war against so-called fly-over America.

But to be fair, there may be circumstances in which federal student loan costs could be lowered without ending the responsibility of the borrower to repay the loan. But none of these options should be undertaken without incorporating a penalty on the colleges and universities which got paid the money as well as getting the federal government out of the student loan business.

Two simple answers would be to lift the payment moratorium while leaving the zero percent interest rate charge intact. This would lower the cost of these loans while not transferring the burden to taxpayers who neither incurred nor benefitted from the indebtedness.  The downside would be that the federal treasury would be denied a billion dollars or more in anticipated interest payments.

If this idea were taken to its logical conclusion, the interest payments paid to date on every student loan could be retroactively applied to the principle, which would dramatically lower or fulfill the loan obligation for millions of Americans.

Another obvious answer would be to allow student loan holders to file for bankruptcy, providing relief for those who genuinely need it. The result would be that those who walk away from the debt incur a much higher cost of borrowing for at least seven years.

At the very least, the student loan program needs to be amended to require any education institution to provide information to students on what the average income for graduates of their college who hold different degrees. As adults, students can make the decision on how much debt they are willing to incur versus the value of the degree they are pursuing.

No matter what, the idea of wiping away the debt must be avoided at all costs. The net effect would be to end any expectation that federal student loans should be repaid in the future, effectively transferring much of the cost of higher education to the federal taxpayer.  Once the cost is transferred, control over the higher education would follow, ending the current state-based public higher education system.

The need-based debt absolution has the impact of disproportionately subsidizing those majors which produced graduates who are least valued by the marketplace. One of the axioms of government is that you subsidize or lower taxes on behavior you want to encourage, while penalizing those you don’t.

For instance, for better or worse, the tax code has subsidized electric vehicle purchases as an incentive for consumers to buy cars that have less range and take a long time to refuel over those which run on gasoline.  This is a policy decision designed to increase ownership of electric cars.

Subsidizing those who get their degrees in soft subjects like French Art in the Medieval Period rather than those who major in math, physics, engineering or other STEM subjects which are more lucrative is  counter to the interests of our nation and should be vigorously opposed.

Student loan dependency is a direct cause of the spiraling cost of higher education, and this manufactured crisis should be used by every Governor to conduct a wholesale review of their public universities and colleges to cut administrative waste and limit or eliminate majors that don’t meet the priorities of the state.   This is the type of action that will significantly drop the future student loan debt to educational value gap.

A federal government student loan forgiveness edict does nothing to solve the real problem, while creating the additional crisis of affirming the idea that financial mistakes can and should be waved away by the federal government without recourse.

This post, Biden’s created student debt crisis, was originally published on The Daily Torch and is republished here with permission. Please support their efforts.