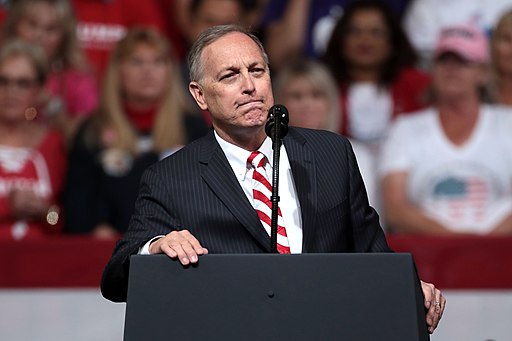 Rep. Andy Biggs: What is happening is a clear abuse of everything we believe in.

The Daily Torch ran a story earlier this week about an investigation by the inspector general for the United States Capitol Police (USCP) into allegations the USCP has been spying on Members of Congress, their staffs, and their office visitors.

The investigation was opened after a bombshell report in Politico detailed alleged abuses including:

As a follow up, the Daily Torch spoke exclusively to Rep. Andy Biggs (R-AZ), a member of the House Freedom Caucus, to get his reaction to the growing scandal.

Daily Torch: Thank you for joining us. Do you know if you, your staff or your constituents have been surveilled by the Capitol Police?

Rep. Andy Biggs: Not that we know of. The first we heard of the spying at the House Freedom Caucus was when Rep. Louie Gohmert showed us the envelopes from constituent mail that was stamped differently from other House mail.

Daily Torch: What is your reaction to all this?

Rep. Andy Biggs: I am really disturbed by it. It seems to me that Nancy Pelosi is weaponizing the Capitol Police, just as she has attempted to weaponize everything she can against conservatives. In the past we’ve seen the IRS weaponized against conservatives. More recently, the Biden administration has weaponized the Department of Justice against parents who speak out at local school board meetings. They are weaponizing everything and it is an outrage.

It would be like the Secret Service investigating the President of the United States, the person they are charged with protecting. If the Capitol Police suspect wrongdoing [of a Member of Congress], they need to call in an outside agency to investigate.

Daily Torch: What actions have you taken to uncover what is going on here?

Rep. Andy Biggs: As soon as the Politico story came out I and other members of the House Freedom Caucus sent a letter to Speaker Pelosi and Rep. Zoe Lofgren, really the foxes guarding the hen house, calling on them to hold hearings and be transparent. So, for now, we are going to have to trust the process and trust the inspector general to get to the bottom of this. He has been transparent in the past.

Daily Torch: Do you believe it was a rank-and-file Capital Policeman or woman who tipped off Politico to what was going on?

Daily Torch: Can the American people ever find out what information the Capitol Police have collected on Members and how that information is being used?

Rep. Andy Biggs: That’s exactly what myself and others in the Freedom Caucus want to find out. We are asking for transparency. The Capitol Police have no business surveilling Members of Congress and their staff, no business at all.

Daily Torch: Can the people’s business get done in this environment where Members and their staffs fear they are being spied upon?

Rep. Andy Biggs: Most people who serve here understand that you cannot have negotiations, brainstorming sessions, and other meetings under these conditions. What is happening is a violation of everything we believe in. It makes it hard for us to do business and forces us to find workarounds to protect our staff, other Members, and our constituents. What’s next? Will we all need to go to SCIFs [Sensitive Compartmented Information Facility] to work?

This is a clear abuse of power.

I hope the IG gets on this quickly and gives us answers so we can move forward. When Republicans regain the majority, we need to clean house and restore trust to this institution.

This post, Congressman Calls for Transparency into Capitol Police SpyGate Scandal, was originally published on The Daily Torch and is republished here with permission. Please support their efforts.