Demand for limited government makes a comeback amid national distress 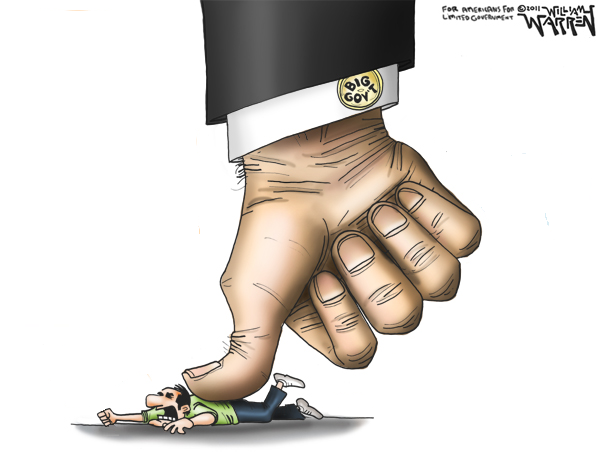 The categorically bleak outlook of American voters on a broad range of issues nine months before the midterms could fuel demand for limited government solutions.

From skyrocketing energy prices to a constant tide of illegal aliens, a possible war in Eastern Europe, and inflation levels not seen since the early 1980s, our faith in the federal government has collapsed.

A new Gallup poll paints a startingly dismal portrait of voter sentiment one year into President Biden’s first term and reveals over two-thirds of Americans are dissatisfied with the size of the federal government. 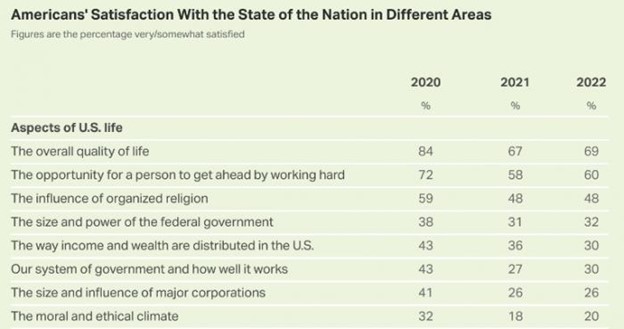 There have been significant declines in voter satisfaction in ten policy areas since 2021, with satisfaction on energy policy, the nation’s military strength, and the state of the economy taking the biggest hits according to Gallup.

Satisfaction with the nation’s energy policies took the steepest dive this year, falling 15 percentage points since 2021. 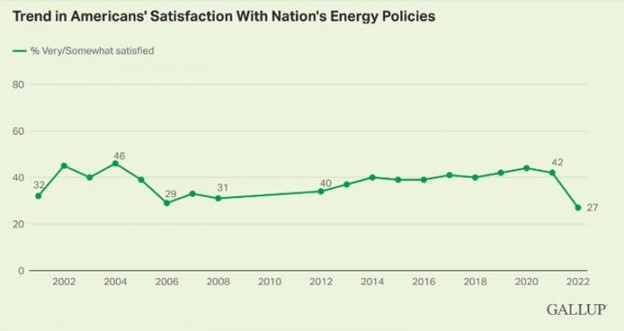 Satisfaction with the nation’s military strength and preparedness has also suffered greatly under the Biden administration and led to a 13-point decline in the past year. This shift is unsurprising considering President Biden led a disastrous exit from Afghanistan that cost 13 U.S. servicemembers their lives and returned the nation directly to the Taliban.  To add insult to injury, Biden is flirting with a war with Russia, something that over two-thirds of the American public is opposed to.

Satisfaction with the economy has also taken a hit in the past year, suffering a 10-point decline since 2021 and clocking in at 33%. Despite a modest rise in national wages at the close of last year, inflation grew to 7%, resulting in a net pay cut for most Americans. On top of that, historically low housing inventory levels, increasing materials costs, and low interest rates have pushed the price of a home out of reach for many families.

Gallup’s survey comes on the heels of a sixty-page research survey released last November that shows over half of Americans say life has taken a turn for the worse since the 1950s.

A January NBC News poll backs up the Gallup and PRRI sentiment and characterizes Americans as “divided, doubting democracy, falling behind, and tuning out”, in the words of Democratic pollster Jeff Horwitt. NBC News reports that President Biden’s approval rating is in the low 40s and, “key Democratic groups are losing interest in the upcoming election.”

Republicans may be the most dissatisfied about the direction of the country at the moment, but according to NBC News, “Republicans enjoy a double-digit advance on enthusiasm ahead of November’s elections, with 61 percent of Republicans saying they are very interested in the upcoming midterms — registering their interest either as a 9 or 10 on a 10-point scale — compared with 47 percent of Democrats who say the same.”

These findings reveal a nation in a state of deep concern not only about kitchen table issues like inflation and the economy, but about more intangible issues like a loss of identity with their country and a decline in quality of life.

While left-wing analysts are rightly worried about their party’s prospects and bracing for a battle this November, big government globalists and the GOP status quo should be worried too.

As Richard Manning, president of Americans for Limited Government warns, Republicans should not take the political winds blowing in their favor as an opportunity for passivity.

“The abrupt and surprising leftward lurch of the federal government on every issue has Americans returning to their limited government roots”, Manning says. “However, Republicans who think they can politically benefit by engaging in a passive resistance campaign will discover that Americans want them to stand up and challenge these Biden’s broadsides against American culture, history and greatness rather than simply providing meek complaints in fear of being cancelled.”

Americans want a change not just in leadership but in direction, away from the vast federal government’s failure. The temperament of the nation is looking a lot like it did in 2015, right before an unexpected non-politician walked out of left field and secured the presidency.

Manzanita Miller is an associate analyst with the Market Research Foundation.

This post, Demand for limited government makes a comeback amid national distress, was originally published on The Daily Torch and is republished here with permission. Please support their efforts.