DHS’ Mayorkas tells Sen. Rand Paul that the Disinformation Governance Board is ‘not the truth police’, but his own website says DHS ‘rout[es] disinformation concerns to… social media’ 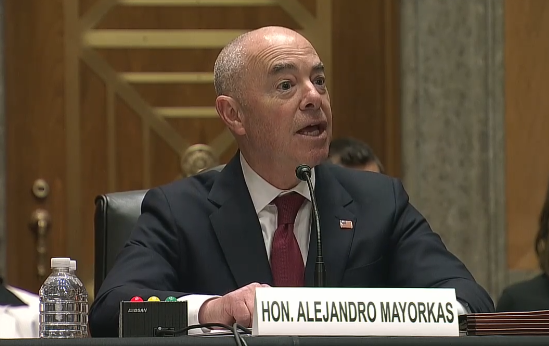 Specifically, Mayorkas said DHS becomes involved “when there is a connectivity between disinformation and threats to the security of the homeland.”

Here, Mayorkas became defensive, saying, “It’s not for us to take it down… Senator, we are not the public health experts to make those determinations.” But, then Mayorkas contradictorily suggested that if a social media post falsely claimed that Covid vaccines contained fentanyl, asking, “should I sit back and take that, or should I actually disseminate accurate information?”

Yeah, maybe you should, Mr. Secretary.

Here, Paul was not merely asking a hypothetical question about what the DHS Disinformation Governance Board might do in the future. He was asking a very well-informed question based on what the DHS has already been doing to remove alleged disinformation from social media since 2018.

That is because in 2018, Congress unanimously passed legislation, H.R. 3359, which authorizes CISA to “disseminate, as appropriate, information analyzed by the Department within the Department, to other agencies of the Federal Government with responsibilities relating to homeland security, and to agencies of State and local governments and private sector entities with such responsibilities in order to assist in the deterrence, prevention, preemption of, or response to, terrorist attacks against the United States.”

Already, the announcement of the Disinformation Governance Board’s censorship and clear violations of the First Amendment’s protections of the freedom of speech and of the press has led to bills by Sen. Tom Cotton (R-Ark.), Sen. Josh Hawley (R-Mo.) and U.S. Rep. Lauren Boebert (R-Colo.) defunding the board.

Now, Sen. Paul’s questioning is revealing a government official whose own testimony about the Disinformation Governance Board is contradictory and inaccurately claims that the Department only becomes involved when there is a security threat.

But citizens opposing Covid vaccines or lockdowns or masks, or opposing the use of mail-in ballots, on social media are not a security threat. That is dissent protected by the First Amendment to public policy questions that elected and appointed officials deal with all the time.

The true implication of Mayorkas’ testimony and the law Congress created in 2018, which only allows for the dissemination of information to the private sector including social media “to assist in the deterrence, prevention, preemption of, or response to, terrorist attacks against the United States,” is that DHS considers opposition to Covid policies including the use of mail-in ballots a terrorist threat.

Mayorkas concluded the questioning with Sen. Paul by declaring, “We are not the truth police.” But is that really true? Mayorkas’ own website says that DHS and CISA are “routing disinformation concerns to appropriate social media platforms” and then even cited specific examples on drug cartels, human trafficking and Covid where this had occurred.

Having the Department of Homeland Security flag social media posts and forwarding those concerns to social media, especially if it results in content being removed, is censorship and a clear violation of the First Amendment. Congress cannot shut DHS and CISA’s Disinformation Governance Board soon enough.

The post DHS’ Mayorkas tells Sen. Rand Paul that the Disinformation Governance Board is ‘not the truth police’, but his own website says DHS ‘rout[es] disinformation concerns to… social media’ appeared first on Daily Torch.

This post, DHS’ Mayorkas tells Sen. Rand Paul that the Disinformation Governance Board is ‘not the truth police’, but his own website says DHS ‘rout[es] disinformation concerns to… social media’, was originally published on The Daily Torch and is republished here with permission. Please support their efforts.