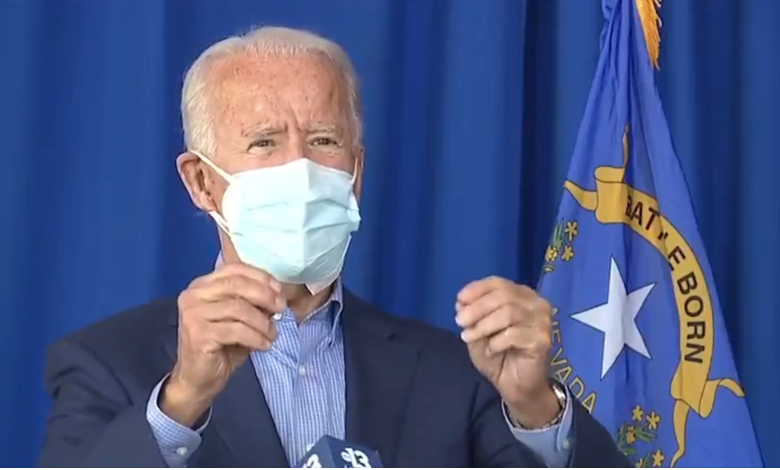 Biden’s naming and shaming strategy of the unvaccinated is not only politically risky, but possibly counterproductive. Trust is the major gap here, and it is largely partisan.

President Joe Biden has taken an enormous hit in public approval over his handling of the Covid pandemic, separate polls from Quinnipiac and CNBC show, as cases of the delta variant are surging nationwide.

In short, Biden’s political honeymoon after being inaugurated in January is over, and it comes as Covid cases are again increasing nationwide, with the Institutes for Health Metrics and Evaluation (IHME) estimating 475,000 probable new cases a day and the Centers for Disease Control (CDC) reporting that 93 percent of new cases are the delta variant.

In Dec. 2020, IHME projected probable cases reached 700,000 a day. And that was without hardly any vaccines having been administered yet.

So, of course public confidence is going to be shaken.

Has Biden lost control of the virus?

Certainly, by the same exact metrics that Democrats and the mainstream media used against former President Donald Trump in 2020 — where every increase in cases and fatalities was attributable to leadership in the White House — the nation would have to consider Biden a failure as well for being unable to slow down the virus’ spread.

Now, it might be that public expectations were set to unreasonable levels in 2020 about how much could be accomplished versus a widespread, mutating virus, but then again, with Democrats now in control of the White House, House and Senate, they have nobody left to blame.

Well, except for the American people. The latest barrage of deflecting blame has come at the expense of Americans who remain skeptical about getting vaccinated against Covid. And so, naturally, Biden has been demonizing them for months.

In May, prior to the surge in cases, Biden ominously warned, “Ultimately, those who are not vaccinated will pay — end up paying the price.”

On July 23, Biden again blamed unvaccinated Americans for the virus’ spread, stating, “what we have now is a pandemic of the unvaccinated.”

Manning outlined differences between the approach being taken by Biden presently to that of former President Donald Trump, noting that while Trump did things like shut down international travel when the outbreak began and locked down the southern border, Biden has done the opposite, ending the former administration’s “stay in Mexico” policy for asylum seekers and keeping flights all over the world going even as the delta variant was gaining dominance.

“If Biden wanted the American people to take the virus more seriously, he would do visible things on restricting international travel and ending catch and release of unvaccinated illegal immigrants who are being relocated across the country,” Manning noted.

That, coupled with inconsistent messaging on masking — after saying if you got a shot, you could take off your mask to incentivize vaccines, the CDC now recommends masks indoors even if you are vaccinated after a spike in breakthrough delta cases in Massachusetts even for those with a vaccine — and, again, public confidence in government’s response is taking a major hit.

Which makes Biden’s naming and shaming strategy of the unvaccinated not only politically risky, but possibly counterproductive. Trust is the major gap here, and it is largely partisan.

With a Democratic president promoting the vaccine, Democrats are unsurprisingly more likely to support getting the vaccine. A Kaiser Family Foundation (KFF) survey reports that 89 percent of Democrats say they’ve already received the Covid vaccine or plan to do so “as soon as possible,” compared with 56 percent of Republicans and 67 percent of independents.

And there is a disparity between vaccination rates at the state and local level along partisan lines. The top 20 states with the highest vaccination rates all voted for President Joe Biden, ranging from Vermont at 67.9 percent to Wisconsin at 52.2 percent, and the bottom 23 states with the lowest vaccination rates, with the exceptions of Georgia and Arizona (although they both have Republican governors and legislatures), all voted for former President Donald Trump, ranging from South Dakota at 47.4 percent to Alabama at 34.8 percent.

Meaning, there may be an aspect of tribalism here. When a Democrat occupies the White House, Democratic voters will be more apt to support the policies put for by the administration, whether on taxes, foreign policy or health care. etc. And vice versa. When a Republican is in the White House, Republicans will be more supportive of the policies.  The same thing appears to be happening with Biden’s push for vaccinations.

Manning said it would be “no surprise” if it were: “Biden and his team have made this a partisan issue during the 2020 election and beyond, and it should be no surprise that those who they have demonized now don’t trust them.”

In other words, politicizing the virus in 2020 may be boomeranging on the entire country in 2021.

Unfortunately, that means if the virus does take a turn for the worse, it will be as a direct result of Biden’s failure to lead the country and earn the trust of those whom he was serving. That is where the buck truly stops.

This post, Has Joe Biden lost control of the virus? Honeymoon ends as IHME estimates Covid cases surge to 475,000 daily., was originally published on The Daily Torch and is republished here with permission. Please support their efforts.