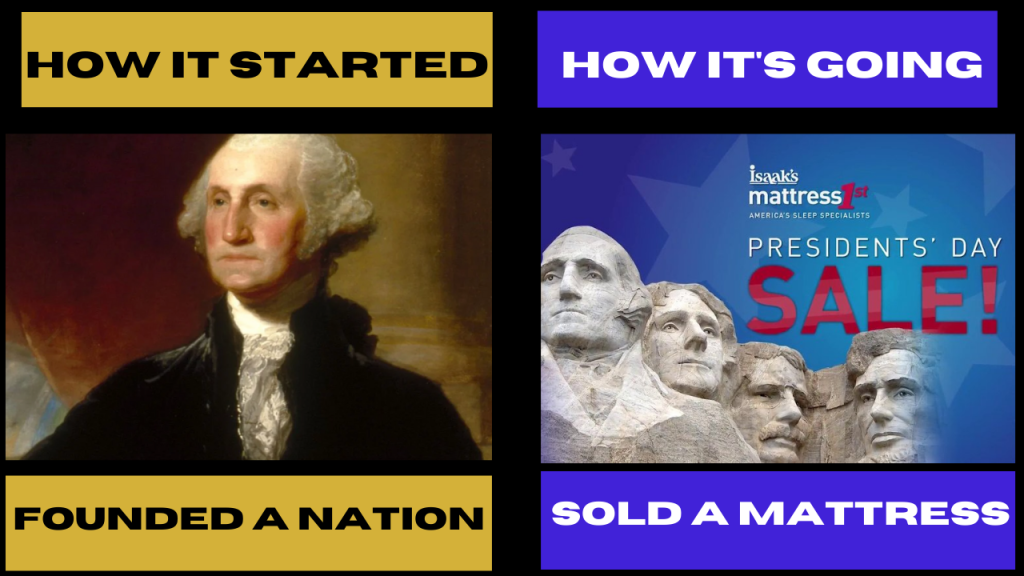 If you prefer to be a purist, join me in calling the third Monday of February George Washington’s Birthday. Though even that is still inaccurate. His actual birthday is February 22.

Presidents’ Day, one of the most misunderstood national holidays, has a surprising history, with many twists and turns from how it started and how it’s going.

Two months after George Washington’s death in 1799, Americans began honoring the nation’s first president with a simple day of remembrance on his birthday, February 22. It did not become an official holiday until 1879, and then it was only recognized in the District of Columbia. Six years later George Washington’s birthday became a federal holiday, marking the first time an American individual was memorialized via a federally recognized bank holiday.

Many Americans mistakenly believe Presidents’ Day is or once was a celebration of the birthdays of both George Washington and Abraham Lincoln. In fact, Abraham Lincoln’s birthday was never a federal holiday, though after his assassination, there were efforts to have his birthday recognized as a federal holiday. It never happened, but states began setting aside Feb. 12 as a paid holiday on their own, according to the nonprofit National Constitution Center in Philadelphia.

And then in 1971 things got weird with George Washington’s Birthday.

That’s when a 1968 law took effect following an executive order by President Richard Nixon. The Uniform Monday Holiday Act moved several federal holidays to Mondays for the express reason of giving workers more three-day weekends throughout the year. The bill had widespread support from labor unions and retailers, who saw it as a way to boost sales.

Washington’s Birthday was then shifted from the fixed date of February 22 to the third Monday of February. Columbus Day, Memorial Day and Veterans Day were also moved from their traditionally designated dates. (As a result of widespread criticism, in 1978 Veterans Day was returned to its original November 11 date.)

The move away from February 22 led many to believe that the new date was intended to honor both Washington and Lincoln, as it now fell between their two birthdays. Marketers soon jumped at the opportunity to play up the three-day weekend with sales, and “Presidents’ Day” bargains were advertised at stores around the country.

By the mid-1980s, Washington’s Birthday was known to many Americans as Presidents’ Day. This shift had solidified in the early 2000s, by which time as many as half the 50 states had changed the holiday’s name to Presidents’ Day on their calendars.

Further corrupting the celebration of George Washington’s birthday, is the mistaken belief among many Americans that Presidents’ Day (itself not a real thing in federal law), is intended to honor all presidents.

I frankly don’t want to honor all American presidents. Many of them were incompetent boobs, or worse. And I don’t have to. What we now call Presidents’ Day is legally still George Washington’s Birthday. I am a purist who prefers we honor the one man that day was intended to honor.

Washington left a vast legacy of good. It should not be hard for every American to find something for which they can thank him. I am grateful that he served only two terms and then returned to private life. That was a first in world history. Leaders never voluntarily relinquished power. When Washington left the presidency, he helped ensure the fledgling republic, the great experiment in self-governance, would never be ruled by an autocrat.

But when you look back in history, it’s not always pure. History is messy most of the time. In this case, if you prefer to be a purist, join me in calling the third Monday of February George Washington’s Birthday.  Though even that is still inaccurate. His actual birthday is February 22.

The post How a celebration of Washington’s birthday turned into Mattress Sales Monday appeared first on Daily Torch.

This post, How a celebration of Washington’s birthday turned into Mattress Sales Monday, was originally published on The Daily Torch and is republished here with permission. Please support their efforts.