If Never Trump had had its way, Roe v. Wade would have never been overturned 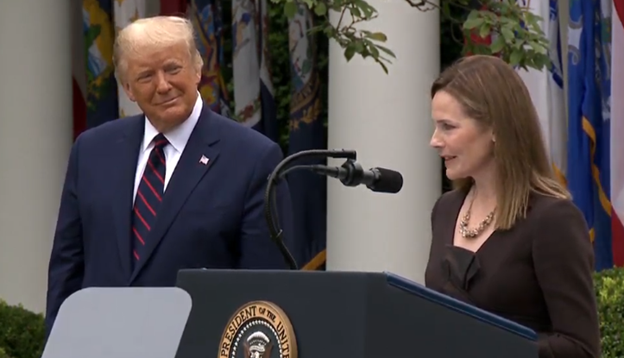 “This was not an easy thing to do, but I am very proud to have done it. Likewise, few would have had the courage to write about it.”

That was former President Donald Trump, responding on Truth Social to a piece by Breitbart.com’s John Nolte entitled, “Only the MAGA movement could have ended the atrocity of Roe v. Wade,” wherein Nolte makes the case that but for the election of Trump in 2016, and the Supreme Court’s 1973 decision Roe v. Wade would have never been overturned by the Supreme Court in Dobbs v. Jackson Women’s Health Organization on June 24.

In it, Nolte bluntly put it: “If you consider yourself a pro-life Republican and weren’t on the Trump Train in 2016, sit your pansy-ass down. Had you and your precious ‘principles’ won the day, Hillary Clinton would have appointed those three Supreme Court justices instead of Donald Trump, and the moral atrocity known as Roe v. Wade would still be a ‘constitutional right.’”

Nolte is right. If former President Trump had never been elected — particularly, if the Never Trump movement in the Republican Party had had its way as it sought to ensure Hillary Clinton would be elected — and this day would have never come.

Neil Gorsuch, Brett Kavanaugh and Amy Coney Barrett were all appointed by Trump as Justices to the Supreme Court in 2017, 2018, and 2020, respectively, replacing Antonin Scalia, Anthony Kennedy and Ruth Bader Ginbsurg, reshaping the nation’s highest court and setting the stage for it to now, in the words of Marbury v. Madison, “to say what the law is.”

For that is all the philosophy of a judicial constitutionalist, either textualists or originalists, essentially entails. The Constitution enumerates certain powers to the executive, legislative and judicial branches, and protects other specifically enumerated rights, like the freedom of speech and of the press and of the right to peaceably assemble, the right to bear arms, the right to not be deprived of life, liberty or property in a criminal or civil context without due process of law, the right against cruel and inhumane punishment and others.

Abortion on the other hand was never an enumerated right in the Constitution. It was read into it as an implicit right by the Court in Roe and a string of decisions such as Griswold v. Connecticut overturning a state law banning contraceptives — the so-called right to privacy cases — that created a jenga tower of precedents, all depending on a majority of liberal, activist judges to preserve, and beginning to fall as soon there wasn’t.

Griswold and Roe gave birth to the modern constitutionalist movement, a countervailing force that Ronald Reagan arguably institutionalized when he won the presidential election in 1980.

In a 1985 speech to U.S. Attorneys at the White House, Reagan again articulated that prerogative, announcing he would appoint more judges who believed in “judicial restraint”, stating, “The independence of the courts from improper political influence is a sacred principle. It must always be guarded… [T]he Founding Fathers knew that, like any other part of the Government, the power of the judiciary could be abused. They never intended, for example, that the courts preempt legislative prerogatives or become vehicles for political action or social experimentation or for coercing the populace into adopting anyone’s personal view of utopia. So, to make sure the courts weren’t misused in this way and did not set themselves up as an institution entirely removed from the society they’re intended to serve, the Founding Fathers provided for checks and balances, one of which was to place the appointive power for the judiciary in the hands of those who are in office as a result of popular election.”

Reagan added, “I intend to go right on appointing highly qualified individuals of the highest personal integrity to the bench, individuals who understand the danger of short-circuiting the electoral process and disenfranchising the people through judicial activism. I want judges of the highest intellectual standing who harbor the deepest regard for the Constitution and its traditions, one of which is judicial restraint.”

And that is exactly what Reagan and his successors did. Since Reagan, Republican presidents have all contributed to the current majority on the Court that ruled to overturn Roe.

George H.W. Bush gave us Clarence Thomas. George W. Bush gave us John Roberts and Samuel Alito, the latter of whom penned the majority opinion in Dobbs. And Trump, with the leadership of then-Judiciary Committee Chairmen Chuck Grassley (R-Iowa) and Lindsey Graham (R-S.C.) and then-Senate Majority Leader Mitch McConnell (R-Ky.) first kept the Antonin Scalia seat vacant throughout 2016, and then brought on Gorsuch, Kavanaugh and Barrett, who now combine for the current, solid 6-3 constitutionalist majority that overturned Roe.

That makes 2016 the critical moment. The tipping point where the work Reagan began was completed by Trump. And yet, in 2016, there was a political movement in the GOP that sought to ensure that former President Trump would never get the Republican Party nomination, and if he did, that he would never be elected.

They knew what they were doing, and what it would mean for the Supreme Court, and particularly any rulings on abortion, the Second Amendment, the Commerce Clause, etc. if Clinton had won. Judicial activism would have reigned supreme.

Republican members of Congress who secretly voted for Hillary Clinton should look themselves in the mirror. They were wrong, and when it mattered the most, they were nowhere to be found.

Eventually Republicans in Congress figured out they needed to overcome their misgivings around Trump and get to work. That’s exactly what the GOP Senate did with regards to judicial appointments. That’s credit where credit is due. But Trump was the critical factor, the one who was able to unite the GOP and beat Clinton even while his own party’s entrenched establishment was trying to sabotage him. Only the President can make appointments.

Now, in order for these historic rulings to have lasting impact, the work of restoring constitutional, limited government — which limits powers by defining and enumerating them — including the proper role of courts must continue. There still need to be future majorities on the Court to uphold the law.

After the 2022 midterms, Republicans will begin the process of selecting their next nominee for president who will challenge President Joe Biden or his successor in 2024. Whoever unites the party and wins the GOP nomination will need the full support of his or her party to prevail — or else all of the gains that have been made in the judiciary by conservatives that took 42 years to bear fruit will be lost, perhaps forever.

The post If Never Trump had had its way, <i>Roe v. Wade</i> would have never been overturned appeared first on Daily Torch.

This post, If Never Trump had had its way, Roe v. Wade would have never been overturned, was originally published on The Daily Torch and is republished here with permission. Please support their efforts.