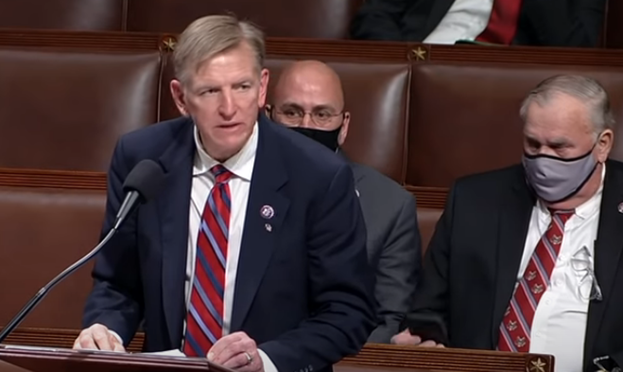 A discharge petition led by U.S. Rep. Paul Gosar (R-Ariz.) for H. J. Res. 46 that would end the national emergency declaration began by former President Donald Trump on March 13, 2020 has reached 111 signatures as of July 15, according the Office of the Clerk of the U.S. House of Representatives.

Companion legislation has already passed the U.S. Senate by a 48 to 47 vote on March 3.

The news comes as Covid fatality rates continue to plummet, according to the latest data from the Institutes for Health Metrics and Evaluation (IHME).

In short, the original Covid variant that was so deadly in 2020—leading to economic lockdowns globally and locally here in the U.S., millions of jobs lost and a massive albeit short-lived recession—is no longer the dominant strain of the virus. Thank goodness.

Meaning, the emergency that existed in 2020 may no longer be relevant the current situation with the virus. The pandemic is over. So, why hasn’t President Joe Biden lifted Trump’s national emergency declaration?

In March, when the Senate passed its version of the Gosar-led measure, Gosar blasted Biden for extending the emergency and keeping America locked in a state of fear: “All across America mask mandates are being lifted and normal life is beginning to return. Yet, Mr. Biden recently extended the COVID-19 national emergency for another year despite painting an optimistic portrait of life for Americans after COVID-19 during his recent State of the Union address.  The extraordinary powers given to Mr. Biden to deal with the pandemic are no longer justified.”

Additionally, the public health emergency, separate from the President’s national emergency declaration, by the Department of Health and Human Services was recently extended by the Biden administration.

Gosar noted the extensive powers these declarations give the executive branch: “Under the current COVID-19 national emergency declaration, more than 120 emergency statutory powers can be invoked by Mr. Biden, including the power to draft Americans without consent, raising Dr. Fauci’s salary, further barricading the United States Capitol, and placing the Public Health Service under military control.”

Despite the progress in the Senate, the House under Speaker Nancy Pelosi (D-Calif.) is another matter entirely. Gosar noted, “Twice I have moved to terminate the national emergency and both times Nancy Pelosi changed the rules of the entire House to prevent this from happening.”

Gosar is right to raise this question. Emergency powers should not be treated lightly, and to the extent that they were justified then, the House should vote on whether they are justified today. Every member of the House should sign the Gosar petition to discharge H. J. Res. 46. The American people are ready to move on from Covid.