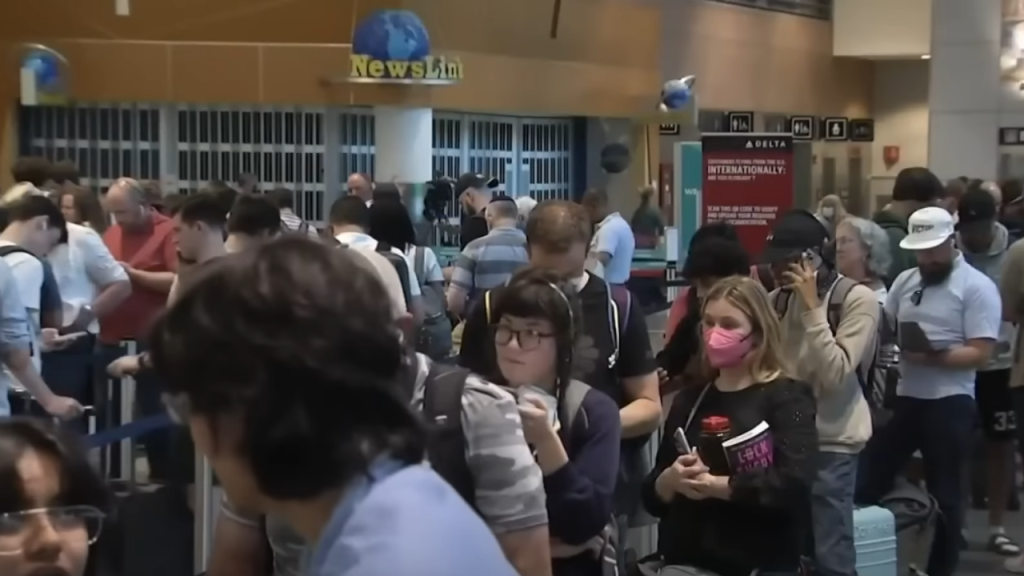 Remember the mandate to fire anyone who wouldn’t be coerced into getting vaccinated craze that consumed much of the first year of the Biden presidency?

Joe Biden is really hoping that you won’t.

Airline disruptions and cancellations are part of the on-going “supply chain” crisis which is playing havoc with the U.S. and world economy.  Sure would be nice to have some of those pilots, flight attendants and ground crew back at the airports now, wouldn’t it?  United Airlines alone claimed that 2,200 workers who received religious or medical exemptions from the vaccine would be placed on administrative leave or put into roles which did not touch customers.

What isn’t known is how many pilots and others retired prior to the mandatory age of 65 due to the threat of vaccination-based firing?  After all, hanging onto your job with the hope that sanity would be restored makes little sense when your retirement pension could be lost if you were fired for cause.

How many pilots left the not-so-friendly skies is unclear.  What is apparent is that currently, pilot shortages are being cited as a reason why thousands of flights are being cancelled.

How much of this labor shortage is a direct result of Biden’s vaccine mandates and the airline industry’s reliance on the federal government to stay in business during the pandemic is not certain.  What is certain is that government mandated firing of pilots, crew and ground personnel over their vaccination status contributed to the chaos we are witnessing.

What we do know is that according to a report by Cowen and Company, airline pilot retirements are projected to accelerate through the mid-2020’s with 24.7 percent of pilots subjected to mandatory retirements between 2022 and 2026.  These 13,000 forced retirements is up about 70 percent from the previous five years as baby boomers age out of the cockpit.

Looking forward, one obvious way to stave off this retirement age mandated shortage would be for Congress to raise the retirement mandate by two years to age 67, allowing those pilots who retain their competency to continue to work.

The Air Line Pilots Association (ALPA) claimed in a June 23, 2022 letter to Secretary of Homeland Security Alejandro Majorkas objecting to Spirit Airlines request for special visas to recruit airline pilots from Australia that there are “1.5 pilots available for every airline pilot job” in the U.S., calling the pilot shortage “fiction.”

One thing is abundantly clear.  Planes are flying full, flights have been cancelled or delayed, and routes eliminated due to crew shortages that are prevalent.  On June 16th, ALPA member pilots of Delta Air Lines wrote in an open letter to passengers that they are currently working a record amount of overtime claiming that by the fall they will, “have flown more overtime in 2022 than in the entirety of 2018 and 2019 combined, our busiest years to date.”

It seems obvious that the quickest short-term solution to the dearth of pilots is to incentivize those who retired early to return and extend the mandatory retirement age.  While various labor/management issues can be worked out to deal with questions about bringing in qualified pilots from around the world, ending the mandatory retirement for more than 2,000 pilots in 2022 would seem the most honest and reasonable immediate fix.

Heck, the airlines might even get on bended knee and beg those who were fired or put on the back bench due to vaccine mandates to come back to the front lines to work – vaccinations optional.

Rick Manning is President of Americans for Limited Government

This post, Pilot Shortages: Let Baby Boomers Fly, was originally published on The Daily Torch and is republished here with permission. Please support their efforts.