Sen. Lee warns ‘reckless government spending is finally catching up with us’ 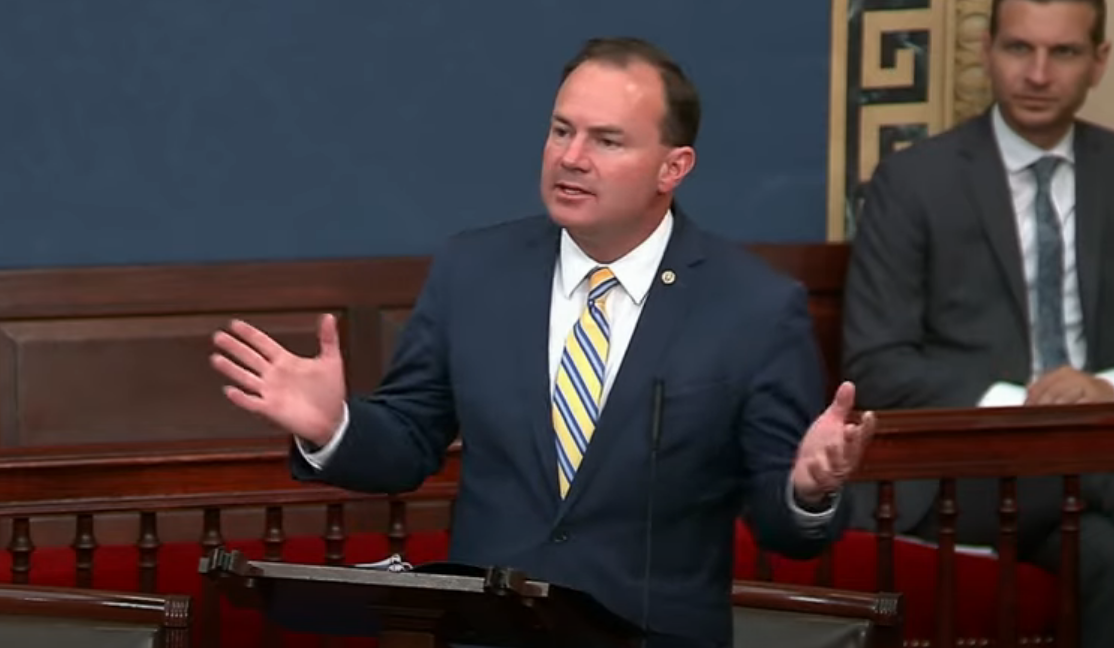 “Hard choices are in front of us, choices that we’re going to have to face sooner than we might wish.”

Editor’s note: Sen. Mike Lee (R-Utah) took to the Senate Floor this week delivering a sobering speech explaining to Americans what is really going on with Washington’s out-of-control spending and the impact it is having on Americans. We are printing his speech in its entirety and hope you will share it with others to help educate them about what is at stake.

For far too long, the federal government’s simply been spending and borrowing far more money than it should.  It’s been borrowing and spending money that it doesn’t have. For individuals, for businesses, even for states and local governments this kind of conduct is not just inadvisable.

Sure, people can get away with that for a short period of time but the laws of mathematics very quickly catch up with them and so they they can’t do it.  But the federal government is unique in this regard. There’s something about the size of the U.S. economy, coupled with the status of the dollar as the world’s reserve currency. It’s a combination of factors that has given the federal government this ability that’s somewhat unique you see because it has access to essentially what amounts to a printing press in Washington, DC that prints out more and more money with reckless abandon. So the federal government just spends more money as if the laws of
mathematics did not apply.

In recent history the federal government’s been spending something in the range of about $4 trillion a year. Tragically, this is a massive sum of money but tragically that has represented about $1 trillion dollars a year more than we bring in.  So we’ve added to our debt at a rate of about $1 trillion dollars a year.  This is stunning especially when you consider the fact that we’ve been at the top of an economic cycle over the last few years.  We had not been in a state of a recession and we were spending this money even with a booming economy.  We weren’t able to bring our outlays down to match our revenues coming into the federal government.

But last year with Covid-19 we spent a total of $6.6 trillion. This is an enormous volume of new additional borrowed money on top of the trillion dollars a year or so that we were already spending, already borrowing that we were already deciding to spend above and beyond what our revenues would allow us to spend.

Now the Democrats have announced a plan to spend another $3.5 trillion just this week.  On top of that, there’s another trillion dollar infrastructure package in the works and earlier this year there was a $1.9
trillion package that was passed.  All of this is occurring in a year when we already have a staggering $28 trillion debt.  The reality is that the federal government does not itself feel the consequences of this. The people do.

We’ve known for a long time that this was presenting something of a threat to future generations, something that we knew would really come to haunt our children and our grandchildren and their children after them. We’ve always known this, but at the rate when we’ve  accelerated our massive deficit spending and the degree to which we’ve extended it this is no longer just a problem for the future. This is affecting us right now. It’s now reached its hand into our wallets to our families and into our day-to-day lives.  What happens when too many dollars are produced out of thin air when we just print more money?  I know there’s an intermediate step there.  Technically it’s borrowed money.  The money that we don’t have isn’t just printed, it is borrowed as the U.S treasury bills are sold. We borrow that money knowing that we’re going to have to pay it back later.  But it has the effect of just printing more money.

When we just print more money, those dollars which have now multiplied, they’re still chasing more or less the same quantity of goods. That means the same quantity of goods with more dollars results in each of those goods being able to command a higher price. When you dump more money into the economy doesn’t make things easier for people, it just raises the costs.  This hurts poor and middle-class Americans especially hard. It hurts those who are living on a fixed income on a fixed wage or salary.

Our own government is causing the increase in cost that hardworking families across Utah and throughout America are already feeling every day as a result it getting harder to fill cupboards and refrigerators and bellies and gas tanks every day. It’s getting more expensive to drive to work or to the doctor’s office or to see your family and friends. From the price of housing, to cars, to food, we’re seeing the general level of inflation increasing at a higher rate than we’ve seen in many many years.

The U.S Bureau of Labor Statistics has produced data the data for May that saw the biggest 12-month consumer price index increase in 13 years. This follows the April number which was 4.2 percent higher than April of last year. The data from May also showed that gasoline prices are up over 50 percent from last year. Used vehicles are on average costing 30 percent more over last year.  Food bought outside the home has seen a jump of four percent. Chicken prices are soaring. Some packages of diapers that cost about $25 as recently as last year, now cost around $40 and there are fewer diapers inside the package, further emphasizing the nature of the problem.

According to our recent survey 85 percent of Utahns are worried about inflation.  So what does this mean? Sadly it means hard choices are in front of us, choices that we’re going to have to face sooner than we might wish. But we will have to face them whether we want to or not.  This means that we’ll have to say no to some hard things things that while not necessarily bad in and of themselves, things that might be good things that others are incorrectly presenting as necessary and affordable when they’re not. We have to say no to them so that we can say yes to what is necessary.  What’s truly necessary will be being able to buy groceries and put food on the table,  being able to pay your rent or your mortgage, being able to turn on the heat or the air conditioning in your home, being able to buy gasoline to drive to work, to the doctor, or to take your kids to school, being able to pay for school clothes and field trip fees.  Not to mention baseball uniforms and soccer cleats.  And you can forget about that trip to see that relative you haven’t been able to embrace in 16 months these are all things that are necessary and they’re all things that have one thing in common, they’re all being jeopardized because of the government’s reckless spending and acting outside of its proper scope.

This you see creates a vicious cycle. It’s a cycle that’s all too convenient for many in government who are making the decisions. Who makes the decisions?  Ultimately,  it’s the Senate and the House of Representatives. Under our constitutional system you can’t spend any money through the Treasury of the United States without Congress authorizing appropriating it. Culturally within the Congress of the United States, among Republicans and Democrats alike,  we’ve grown all too accustomed to a dangerous pattern that’s good for the political class, maybe.  Maybe it is favorable in some ways for a small handful of elected politicians, but bad for everyone else.

The way it works in this town, the way that news media tends to report on these things, you tend to get praised if you vote “yes.” There’s always someone you can point to who benefits from the bill that gets passed from the money that gets spent. Its not very often anyone gets anything but criticism for voting against those things, even if  by their very nature those things tend to impoverish, albeit in increments that are sometimes difficult to observe, the purchasing power of poor and middle class Americans.  In many ways we’re trading one thing for another. We’re trading the ability to be praised as an elected official  one day, but middle class Americans are paying the price for a long time.

We’ve been able to sweep this under the rug. For a long time, Washington has avoided getting blamed for this because it’s been incremental and indirect. It’s been something that’s perhaps explainable in some cases through other mechanisms so not everyone immediately connects inflation to out-of-control spending decisions by elected Senators and Congressmen. But we’ve ratcheted up this spending levels so much over the last year-and-a-half, that people are feeling the effects more directly, more immediately, and more unmistakably than ever before.

It is our fault because yes we have put our own political convenience ahead of the interests of middle-class Americans. That’s to our shame, especially if we don’t recognize that we’re doing it and seek to correct it.

At times I’ve been accused of being a reflexive “no” vote on things that some of my colleagues are willing to explain away or justify or defend wholeheartedly. But here’s an important point that I would like to make. I vote “no” not by reflex but through reason. I vote no when I see how the consequences will affect those I represent in real, everyday life, not just the intended consequences of legislation that might indeed have a good goal and might indeed accomplish good things, but the unintended negative consequences.  I vote “no” if it’ll mean saying yes” to what really matters for making everyday life better for Utahns and hardworking Americans across the country.

I vote “no” so that Utahns can say “yes” to the things they need because if we don’t ever say “no” we’re hurting them. If we always say “yes,” we’re putting them in a position of having to say “no” to the things that matter most to them and to their children and their families.

This government’s reckless spending is notorious and it’s finally catching up with us. This problem exists because the federal government and the politicians in Washington, DC work hand-in-hand with our central bank to spend enormous amounts of money that we simply do not have. This has been facilitated by so many who are so willing to call on it, even though this results in the dangerous accumulation of power and money in the hands of the few at the expense of the poor and middle class.  We are feeling the consequences of these things right here and right now.

It’s up to us to take action to pump the brakes and steer our government back in a fiscally responsible sustainable and sane direction. The consequences will only get worse if we do not and if we do not do so very fast.

The post Sen. Lee warns ‘reckless government spending is finally catching up with us’ appeared first on Daily Torch.

This post, Sen. Lee warns ‘reckless government spending is finally catching up with us’, was originally published on The Daily Torch and is republished here with permission. Please support their efforts.