Sen. Ron Johnson: ‘This is looking more and more like a dispute over the President’s declassification authority.’ 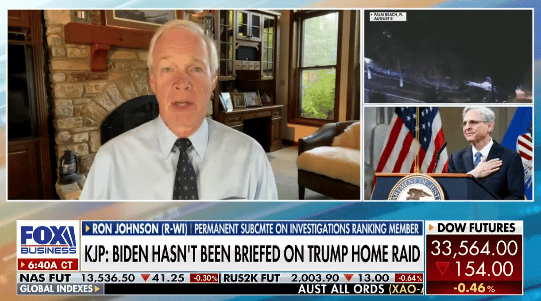 “To me, this is looking more and more like a dispute over the President’s declassification authority.”

That was Sen. Ron Johnson (R-Wis.) on Fox Business with Dagen McDowell on Aug. 15, responding to the Federal Bureau of Investigation’s (FBI) Aug. 8 raid of former President Donald Trump’s Palm Beach, Fla. residence, Mar-a-Lago, saying that the documents that were seized by the FBI may have contained documents that had already been declassified by Trump.

Johnson explained, “I know President Trump was trying to declassify or had declassified information the tail end of his administration. We have not seen one page of that,” referring to a Jan. 19, 2021 “Memorandum on Declassification of Certain Materials Related to the FBI’s Crossfire Hurricane Investigation” that Trump had signed.

The memorandum described the documents as “a binder of materials related to the Federal Bureau of Investigation’s Crossfire Hurricane investigation.  Portions of the documents in the binder have remained classified and have not been released to the Congress or the public.

In it, Trump ordered the documents declassified: “I hereby declassify the remaining materials in the binder. This is my final determination under the declassification review and I have directed the Attorney General to implement the redactions proposed in the FBI’s January 17 submission and return to the White House an appropriately redacted copy.” But the redacted versions of the documents were never returned by the Justice Department to the White House.

Johnson and Senate Judiciary Committee Ranking Member Chuck Grassley (R-Iowa) have been trying to get at these documents for more than a year, in a Feb. 15, 2022 letter and an Oct. 2021 letter to Attorney General Merrick Garland, demanding that they be disclosed.

Johnson said regardless of the status of the documents, that the matter could have and should have been settled in civil courts, not criminal: “My guess is some of that information probably went down to Mar-a-Lago — was declassified — but now I guess there’s a dispute. This dispute ought to be settled in court, not with search warrants of a former president.”

Johnson added, “My understanding is that the President’s the ultimate authority in terms of what is going to be declassified.”

He’s right. Specifically, the President’s classification and declassification powers are implicit in the Constitution’s Article II, Section 1 vesting clause: “The executive power shall be vested in a President of the United States.”

In 1988, in Department of Navy v. Egan, the U.S. Supreme Court confirmed the President’s of classification of sensitive national security documents derive from his Article II constitutional powers, not from any Congressional statute: “The President, after all, is the ‘Commander in Chief of the Army and Navy of the United States.’ U.S. Const., Art. II, 2. His authority to classify and control access to information bearing on national security and to determine whether an individual is sufficiently trustworthy to occupy a position in the Executive Branch that will give that person access to such information flows primarily from this constitutional investment of power in the President and exists quite apart from any explicit congressional grant.”

Now the magistrate judge overseeing the case in federal court, William Reinhart, has ordered parts of the affidavit used in the Justice Department’s warrant application to at least be partially published, ruling that the government had failed to show cause in keeping the justification for raiding the former president’s home secret. The Justice Department has to now propose redactions for sensitive information.

Similar to a president declassifying documents, Reinhart can decide to accept the Justice Department’s redactions, modify them, or reject them completely and publish the entire affidavit. And once that determination has been made, that’s it, the document becomes public.

As of this writing, it is unclear whether the Justice Department ever disclosed to Reinhart that Trump had already declassified the documents in question. If it did, then it should be in the affidavit. If it did not, those omissions could have been used to convince Reinhart that a crime had been committed when that was an impossibility given Trump’s actions to declassify the documents while he was still the President. Either way, we know Sen. Johnson and the American people will be eagerly awaiting Reinhart’s reply. Stay tuned.

The post Sen. Ron Johnson: ‘This is looking more and more like a dispute over the President’s declassification authority.’ appeared first on Daily Torch.

This post, Sen. Ron Johnson: ‘This is looking more and more like a dispute over the President’s declassification authority.’, was originally published on The Daily Torch and is republished here with permission. Please support their efforts.