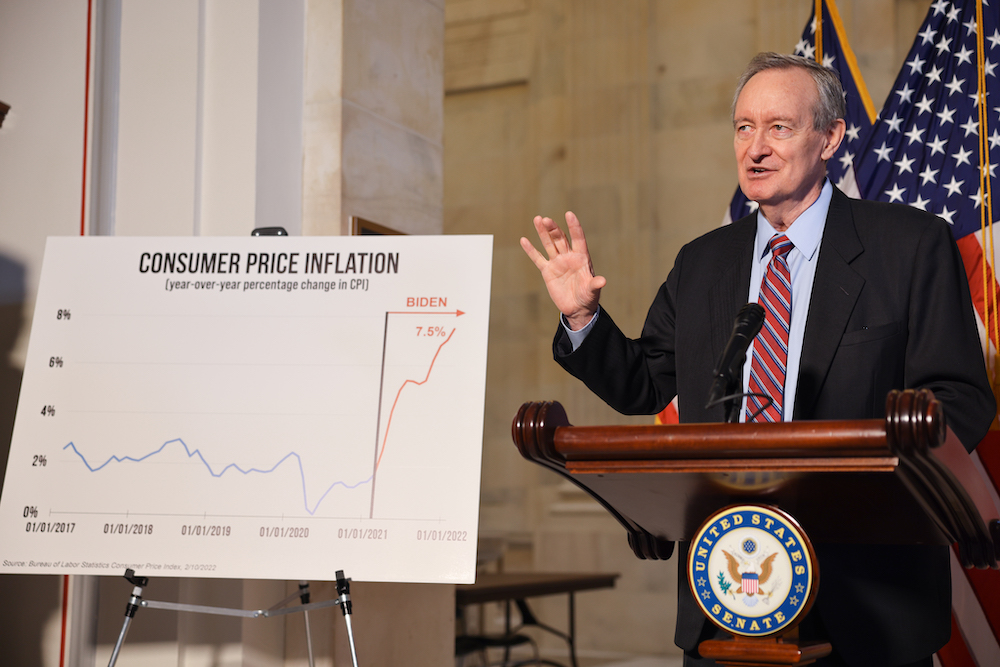 With inflation at a 40-year high under the Biden administration and Americans struggling with soaring costs for everyday expenses, Senate Republicans are raising alarms.

With inflation at a 40-year high under the Biden administration and Americans struggling with soaring costs for everyday expenses, Senate Republicans are raising alarms.

“Americans are all painfully aware that we now have a 7.5 percent inflation rate. This is the highest rate since 1982–the highest rate of inflation in 40 years.  Producer price inflation is 9.7 percent.  These numbers are very clearly a result of the incredible, excessive overspending that is heating up the economy.

“Under the economic policies we’ve seen over the last year:

“It cost families nearly 7 percent more to put food on the table.

“Energy costs skyrocketed by 27 percent.  The price of gas exploded by 40 percent.  The bill for fuel oil to heat the family home ballooned by over 46 percent.  Gas service to keep the stove running in your home increased by almost 24 percent.

“If you are in the market for a car, a new car costs over 12 percent more, and a used one costs almost 41 percent more.

“Moody’s Analytics estimates the average U.S. household is spending an additional $276 a month due to inflation.

“A Penn Wharton study estimates households spent $3,500 in 2021 just to keep up with rising costs.

“Small businesses cite inflation as the biggest challenge they face.

“Workers have lost purchasing power as they watch their wages being eroded and eaten up by, and wages aren’t keeping up with rising costs.

“Congress should be working to address the harmful effects of inflation and taking steps to address our ballooning debt crisis and unsustainable mandatory spending.”

In addition, Sen. James Lankford (R-Okla.), along with Senate Finance Committee Republicans, sent a letter to the Congressional Budget Office (CBO) asking for detailed information on the harmful effects inflation has on the federal budget.  As inflation continues to hammer pocketbooks of Americans, it also eats up fiscal space by increasing deficits and debt, and acts like a stealth tax on households and businesses.

Without doubt, in 2021, we had gone from a long period of low and stable inflation to persistent and accelerating inflation that is harming workers, households, and the economy.  Inflation is also acting like a stealth tax, eating away at the purchasing power of Americans’ paychecks.

While many did not foresee runaway, persistent, and accelerating inflation over the course of 2021, others did, especially in light of the American Rescue Plan Act which, according to CBO, will increase estimated outlays by $1.8 trillion over the 2021-2030 period and increase the estimated deficit by $1.9 trillion, measured against a budget baseline which assumed far lower inflation than was realized last year.

Increased inflation leads to more federal spending and more federal revenue.  The added revenue stems partly, and unfortunately for taxpayers, from nominal inflationary gains that do not show up in real, purchasing-power-adjusted gains for federal taxpayers.  The stealth-like nature of inflation taxes, and revenues that flow from them, should not be viewed as an economic plus.

Efforts by the Federal Reserve to slow the rate of inflation by raising interest rates can have painful economic consequences, driving up the cost of both public and private sector borrowing.  As history showed with the Federal Reserve under Chairman Volker, once inflation is out of hand, taming inflation can be temporarily devastating to the economy.

A budget workbook on CBO’s website suggests that a persistent one percent inflation increase above CBO’s baseline projection made early last year could increase deficits by nearly $2.3 trillion over a 10-year period.   And, according to the workbook, a one percent increase in interest rates above CBO’s baseline projection, beginning in 2022, could increase deficits by more than $2.1 trillion over a 10-year period.   While those results are only approximations of what CBO would project using its broad set of economic and budget models, they are indicative of significant adverse budgetary effects amounting to trillions of taxpayer dollars arising from higher sustained inflation and interest rates moving forward.

Adverse effects of inflation on the federal budget, including likely increased payments to service outstanding debt, absorb fiscal space and crowd out a host of national priorities, ranging from low-income support programs to national defense to disaster relief.

Given the potential for significant adverse budget effects from inflation, we ask that CBO provide a discussion of those effects. Please provide a description of budgetary effects of: high inflation; inflation that persists; and, higher interest rates that can result from high inflation and possible Federal Reserve responses to inflation.

Inflation is killing Biden and his fellow Democrats in the polls.  Even William Galston of the left-leaning Brookings Institution writes, “The unpredicted and unwelcome return of rapid price increases has reshaped the political landscape with stark consequences for the Biden agenda. The American people now believe that inflation is the most important issue facing the economy and the country, and they don’t think that President Biden is paying attention to it. This explains why so many Americans disapprove of his economic performance—and why it is undermining his presidency.”

If President Biden can pivot and move toward the middle by adopting centrist policies and stop allowing the radical left wing of his party to dictate policy, he might be able to save his presidency.

This post, Senate Republicans raise alarms about Biden’s out-of-control inflation, was originally published on The Daily Torch and is republished here with permission. Please support their efforts.