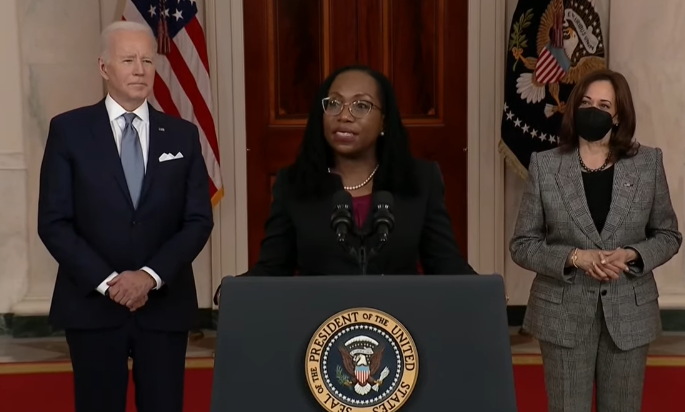 Judge Ketanji Brown Jackson, President Biden’s nominee for the Supreme Court, is the most radical nominee to ever be presented for confirmation.

The President has the constitutional right to nominate anyone he wants, but one of the few breaks on the power of the Supreme Court provided in the Constitution is the Senate confirmation process.  Once affirmed, the nominee can sit on the highest Court in the land until death unless they break laws that warrant impeachment.

For this reason, Senators from both sides of the aisle must completely and thoroughly review Judge Brown Jackson’s suitability to serve on the Supreme Court.  And on a bi-partisan basis should support the release of records from her service as vice-chair of the U.S. Sentencing Commission. These records are directly applicable to her beliefs related to the federal criminal justice system which is overseen by the Chief Justice of the Supreme Court.  There really is no reason to begin any examination of her record prior to these documents being made available to the Senate.

Any questioning of Brown Jackson must be tough but honest, unlike the shrill, dishonest spectacle created by the left during the Kavanaugh confirmation hearings.

Judge Brown Jackson can be confirmed by Democrats alone with a tie broken by the Vice President, but it remains an important duty for GOP Senators to get to the bottom of some troubling statements related to her statement that she drew heavily from Janet Dewart Bell, a prominent advocate of critical race theory.

Given her embrace of the discredited 1619 Project which argues that America is a fundamentally racist country, does she believe that the Constitution is a racist document?

If so, how can she raise her hand and swear to defend it, if confirmed.

While we know how she would likely answer, the question is really posed with certain Democrat Senators who represent red states in mind, because any ruling that she might make in the future will be part of the political legacy of anyone who votes to put her on the Court.

Ketanji Brown Jackson deserves a fair and honest hearing, but Senators need to do their jobs and make a determination if her views are consistent with performing the duties of a Supreme Court Justice in a manner consistent with the law that is one thing, but if her views are outside any reasonable boundaries of the mainstream, she must not be affirmed.

This post, Still important for GOP Senators to fully vet Judge Ketanji Brown Jackson, was originally published on The Daily Torch and is republished here with permission. Please support their efforts.