The end of nuclear summitry between the U.S. and Russia in part paved the road to war in Ukraine 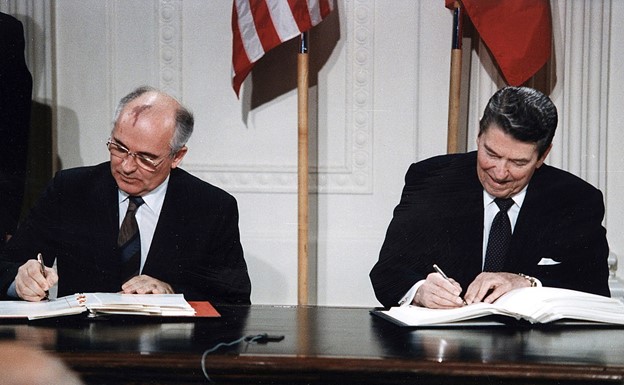 Russia has invaded Ukraine after Russian President Vladimir Putin recognized and annexed the breakaway cities of Donetsk and Luhansk on Feb. 21, leading to the imposition of new sanctions on Russia, with Germany halting approval of the Nordstream 2 pipeline and the U.S. imposing financial sanctions on Moscow including blocking purchase of Russian government treasuries.

But could the war have possibly been avoided?

In a statement on Feb. 24, former National Security Advisor Michael Flynn condemned the invasion, writing, “President Putin calculated this strategic, historic, and geographic play and made the decision to move, and he did… there will never be justification for this invasion or any other form of invasion.”

Similar criticisms were leveled by former U.S. Rep. Tulsi Gabbard (D-Hawaii), who wrote on Twitter on Feb. 23, “This war and suffering could have easily been avoided if Biden Admin/NATO had simply acknowledged Russia’s legitimate security concerns regarding Ukraine’s becoming a member of NATO, which would mean US/NATO forces right on Russia’s border…”

Do Flynn and Gabbard have a point?

The cities in question, Donetsk and Luhansk, are located in the Donbas region and controlled by pro-Russian separatists since 2014. They were among the breakaway provinces including Crimea seceded from Ukraine after former Ukrainian President Viktor Yanukovych was removed from power in early 2014. President Joe Biden wrote about it in his book, writing that he personally pushed Yanukovych out to get a European Union trade deal ratified when he was Vice President, touching off the civil war there.

In a Feb. 22 televised speech, Putin demanded a halt to any further NATO expansion and that NATO return to its 1997 borders and cited the threat of intermediate range nuclear weapons in the wake of the U.S. abandoning the Intermediate Nuclear Forces (INF) Treaty in 2018 by former President Donald Trump and the 1972 Anti-Ballistic Missile Treaty in 2002 by former President George W. Bush.

Putin blasted the “the disregard for our security demands and concerns, NATO’s continued expansion, withdrawal from the ABM Treaty” and contended that “after the US destroyed the INF Treaty, the Pentagon has been openly developing many land-based attack weapons, including ballistic missiles that are capable of hitting targets at a distance of up to 5,500 km. If deployed in Ukraine, such systems will be able to hit targets in Russia’s entire European part.”

Here, Putin is referring to the treaty between Ronald Reagan and Mikhail Gorbachev, which banned nuclear weapons with ranges of 310 miles and 3,410 miles, with travel times of minutes. It was Reagan and Gorbachev’s greatest achievement. The treaty was so successful that nuclear summits continued into the George H.W. Bush administration, resulting in the first Strategic Arms Reductions Treaty (START) in 1991 to reduce strategic arms for the first time in history. It created so much security in Europe that the Cold War ended.

And now that it’s gone, there’s a new Cold War.

In a similar vein, during the administration of President George W. Bush, then-U.S. Ambassador to the United Nations John Bolton supported unilaterally withdrawing from the 1972 Anti-Ballistic Missile Treaty with Russia, which Bush ultimately did in 2002. Bolton wrote in his memoirs, “it was absolutely critical to get out of the ABM Treaty unambiguously. Then, whether we succeeded or failed in broader negotiations with Russia, we would be free to pursue a missile defense system to protect Americans from current threats,” calling it mockingly a “sacred scroll” to arms control advocates, vastly understating their historical (and stabilizing) importance, in my view.

In hindsight, love or hate these decisions, they have clearly played a role in escalating the current conflict by definitively destabilizing the international framework for nuclear non-proliferation. It destabilized Europe.

Particularly, without the INF Treaty, discussions to put Ukraine in NATO and the U.S. nuclear deterrent there, appear to have been viewed the same way the U.S. viewed it in 1962 when the Soviet Union parked nuclear missiles off the coast of Florida in Cuba. Of course Moscow was going to feel threatened.

Now Russia is racing to put as much distance between itself and NATO as it can. When combined with Obama-Biden’s decision in 2014 to push Yanukovych out of power in Ukraine, predictably, war broke out, first in 2014 and again in 2022.

Clearly, the U.S. underestimated Russia’s response to overthrowing the pro-Russian Ukrainian government in 2014. We helped start the war there, and now Russia is finishing it.

Unfortunately, in 2016 and 2017, instead of summits and diplomacy — which we apparently really, really needed — we got the alleged Russian hack of the Democratic National Committee (retaliation for knocking out Yanukovych?) and Russiagate, where the Clinton campaign, U.S. intelligence agencies and the Justice Department falsely tried to establish links between former President Trump and Russia, accusing Trump of conspiracy with Moscow to steal the DNC emails and put them onto Wikileaks. It led to FISA warrants and a top-secret national security investigation that was carried over into the Trump administration in 2017.

By the time Trump and Putin held a summit in Helsinki, Finland in 2018, the massive damage to U.S.-Russian relations was already done. Anti-Russia hysteria was at such a fever pitch, Trump arguably had a perverse incentive to pull out of the treaty just to prove he wasn’t a Manchurian Candidate, even if it was destabilizing. We’ll never know what the counterfactual would have been, but as General Flynn noted, wars begin when diplomacy fails, sometimes.

Basically, despite having thousands of nuclear weapons pointed at one another, more than enough to pose an existential threat to humanity, the U.S. and Russia have remarkably stopped having these discussions. Why?

It is perhaps a testament to diplomacy that the Minsk accords (four-way talks between Russia, Ukraine, Germany and France) lasted as long as they did. Sadly, what has been lacking since 2014 to present was U.S. leadership that was able or willing to talk to Russia. Why?

It’s one thing to complain about INF Treaty violations (Russia was complaining, too) and then to sit down with your treaty partner to talk about it, and quite another to tell them as a matter of policy we think it’s okay to park nukes 300 miles away from their cities, and worse, that the matter is no longer subject to treaty obligations or even diplomatic negotiations. I think it was incredibly short-sighted.

Instead of enforcing or strengthening and supporting the nuclear non-proliferation framework under ABM, INF, START and the Nuclear Nonproliferation Treaty, the U.S. withdrew from many of its obligations.

Now we’re definitely in another arms race that after a period of escalation, which might last decades if it is not soon interdicted, but ultimately, like the war in Ukraine, will have to be settled diplomatically. Besides sanctions, talking is about the only other thing to do. Unfortunately, this is not an issue that can be settled with fire.

The post The end of nuclear summitry between the U.S. and Russia in part paved the road to war in Ukraine appeared first on Daily Torch.

This post, The end of nuclear summitry between the U.S. and Russia in part paved the road to war in Ukraine, was originally published on The Daily Torch and is republished here with permission. Please support their efforts.