The Freddie Mac Home Price Index skyrocketed by a record 17.8 percent in 2021. Are we in another housing bubble? 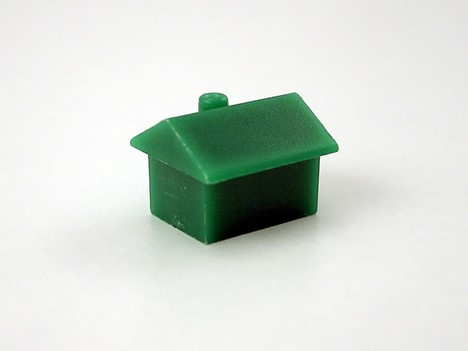 Home values went up an astonishing 17.8 percent in 2021, according to the Freddie Mac Home Price Index, the highest appreciation of housing prices on record, with data going all the way back to 1975. One has to go back to 2004-2005 and 1977-1979 for the last times home values were accelerating by double digits.

In both instances, following the high inflation, there were recessions in 1980 and again in 2008 and 2009, respectively. But in the first instance, the growth rate of prices slowed down to just 0.65 percent growth in 1981, and in 2007-2011, home values actually declined nationally a combined 28.6 percent. The biggest decrease came in 2008, when home values declined nationally by 12.5 percent. Why the difference? 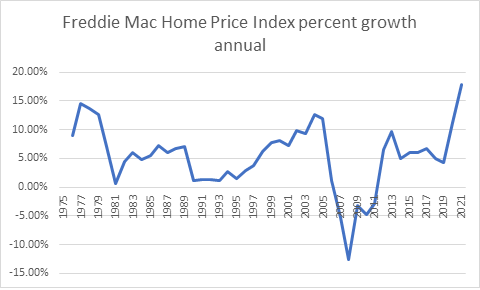 Clearly, the size of the inflation is not the predicter. From 1976-1980, home values increased a combined 57 percent, and from 2000-2005, they rose a combined 58 percent. Same amount, but vastly different outcomes.

Whereas, in the 2000s, there was also a lot of new home construction — even through the Dotcom bubble popping and the 2001 recession — but eventually fewer potential homebuyers, resulting in the construction of ghost towns in states like Florida and Arizona, combined with much lower interest rates and very loose credit conditions. In fact, new housing starts peaked in Jan. 2006, but housing prices would not decline nationally year over year until 2007 as demand fell off a cliff.

The combination was toxic, resulting in the price declines, which led many homeowners who had bought at the top of the market to simply default on their mortgages rather than sell their homes for a loss.

Since that time, the Fed began selling the MBS back to the market, reducing its holdings to $1.4 trillion by Jan. 2020, until Covid struck and the central bank resumed quantitative easing. Now, it holds a record $2 trillion of MBS. Which, love it or hate it, is a significant difference between now and 2008, when it held none.

In other words, even if there is a downturn in housing in the coming years, because the Fed has remained so active on the backend of the housing market — providing liquidity for banks to provide home loans without fear of default — by maintaining its MBS holdings, in the very least that should mitigate the risk of a financial crisis, where losses in a few firms could cascade into a system-wide failure.

That said, credit conditions remain very loose. If you want a home loan, you can get one, essentially, with little money down and relatively low interest rates. On the other hand, the amount of homes being listed for sale has been declining nationally for the past four years amid the housing boom, according to data compiled by Realtor.com, indicating housing shortages if anything.

Which, makes a case that there may be a housing shortage rather than a surplus that would lead to a bubble popping as in the financial crisis. These shortages, the so-called supply chain crisis, owe to major production slowdowns during Covid in 2020 of everything from oil, to natural gas, to semiconductors and, yes, housing.

Then, demand recovered sooner than expected, combined with more than $6 trillion of spending, borrowing and printing by Congress and the Fed to combat Covid and its ensuing economic lockdowns, and we have quite literally had Milton Friedman’s “too much money chasing too few goods.”

In short, while the housing market remains very hot, expect to see a slowdown in the growth rate of home prices if not an outright decline as the current bout of inflation boils over and the economy overheats. And while we might expect a recession in the not so distant future, we likely lack the tools to fully predict its severity and how it will specifically will impact the housing market. Are we in another housing bubble? Stay tuned.

The post The Freddie Mac Home Price Index skyrocketed by a record 17.8 percent in 2021. Are we in another housing bubble? appeared first on Daily Torch.

This post, The Freddie Mac Home Price Index skyrocketed by a record 17.8 percent in 2021. Are we in another housing bubble?, was originally published on The Daily Torch and is republished here with permission. Please support their efforts.

The Perils of America’s Woke Military