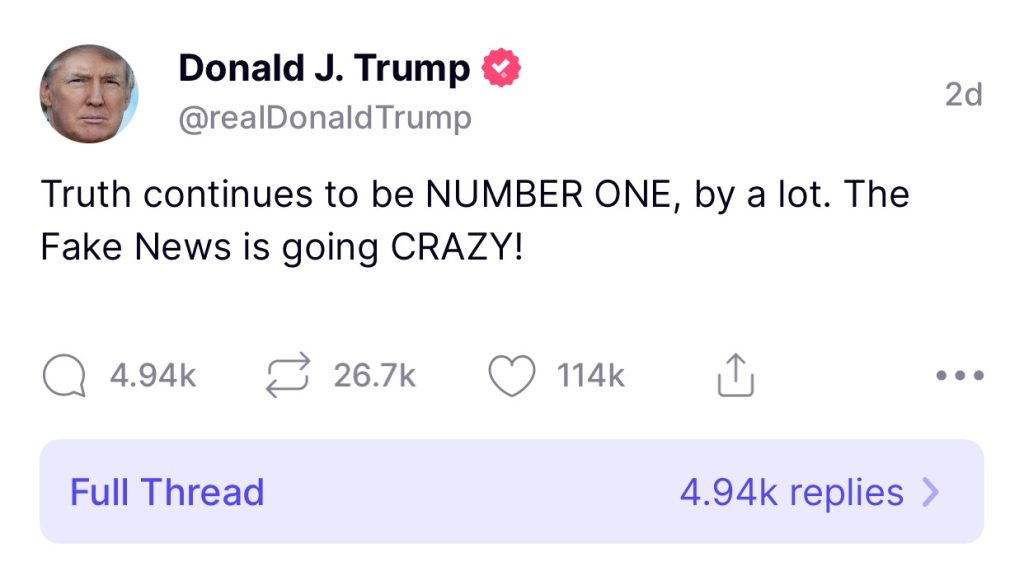 No risk, no reward.

That’s a lesson official Washington, D.C. should now be learning about former President Donald Trump’s foray into running a social media company, TruthSocial.com, which is currently running a successful public beta that Apple customers can download in the App Store.

Before the app has even been offered on other platforms such as Android or via desktop computers, President Trump has already garnered almost 2.4 million followers — in a week — as the app rocketed to the top of the App Store as the most downloaded app the past several days.

Before he was banned by Twitter and Facebook in 2021, Trump had more than 80 million followers, and while he is still quite a ways off from where he was, he and the team at Truth Social including CEO Devin Nunes have to be very pleased with the current rollout so far.

Anecdotally, we can tell you that so far the Americans for Limited Government’s @LimitGov profile is seeing significant engagement that appears vastly superior to other social media platforms such as Twitter or Facebook despite smaller initial subscription counts.

By the end of the year, we expect that ALG’s followers will be greater in number than Twitter and Facebook combined, and we’ve been on those platform for more than a decade.

To be fair, ALG’s cartoonist A.F. Branco and Truth Social CEO Devin Nunes, did each give us generous boosts on the platform today. That will get you follows, but that doesn’t necessarily mean those followers will engage with your content. In this case, thankfully, they are engaging.

We can see the difference. Truth wants us to grow.

In other words, there might be fewer people on the Truth Social platform so far compared to some of the other more established platforms, but the ones that are on Truth Social already are not merely engaging with posts, they’re actually clicking off of the platform to the offsite content that is being shared at a much, much higher conversion rate.

Now, how that holds up over time is another question, but Trump seems to be onto something here, especially if one plans on being politically active on the platform. So far, Truth Social appears to be attracting, at least initially, a primarily conservative, Republican audience whose users also happen to be very strong supporters of Trump and are very civic-minded.

These are likely voters.

In the midterms, enthusiasm always comes into play, where the opposition party tends to generate more than the incumbent party. In midterm elections dating back to 1906 through 2018, the party that occupies the White House usually loses on average 31 seats in the House, and about three seats in the Senate. That’s more than enough for Republicans to take back one or both chambers of Congress in 2022.

On that count, presently in the latest ABC News/Washington Post poll conducted April 24-28 of registered voters, 83 percent of Republicans report they are absolutely certain to vote in November, compared to 76 percent of Democrats, giving Republicans a 7-point edge.

More broadly, Republicans are leading the generic ballot by on average 4.2 points, 46.4 percent to 42.2 percent.

These are all reading one would expect to see in a midterm cycle with a Democratic President and Republicans out of power.

That is why Truth Social is almost certainly the place where Republican members and candidates for Congress are going to want to gravitate towards in 2022 for the November midterms. What better way to build a fresh list of supporters on a platform that is finally not controlled by Silicon Valley?

Here, Trump has figured out a way to capture the energy Republicans are gaining through the midterms, by giving conservative activists a platform that gives them the information they want, and causes like Americans for Limited Government they can support wholeheartedly.

And Trump is getting every single one of their email addresses with every single download from the App Store, who can now follow him every day. Here, Trump has created a product that grants exclusive access to his thoughts and ideas, whether about what direction the country is headed in, criticizing President Joe Biden or if he is endorsing candidates on the campaign trail.

Trump is helping the GOP to build a wider platform in 2022, and if he chooses to run for president again, in 2024. How many other Republican candidates will have a social media app to help them win the Republican primary or general election in 2024? How many would have even tried to stand up to Big Tech’s tyranny in this way?

In modern politics, this is not only how to build a movement, but an institution.

By launching Truth Social, especially after Twitter was liberated by Elon Musk as a free speech platform, Trump has taken a great risk to his brand and reputation as a successful entrepreneur. And now it looks like the American people are rewarding him. Good for him.

The post Trump’s Truth Social platform could help propel GOP to majorities in the 2022 midterms and beyond appeared first on Daily Torch.

This post, Trump’s Truth Social platform could help propel GOP to majorities in the 2022 midterms and beyond, was originally published on The Daily Torch and is republished here with permission. Please support their efforts.