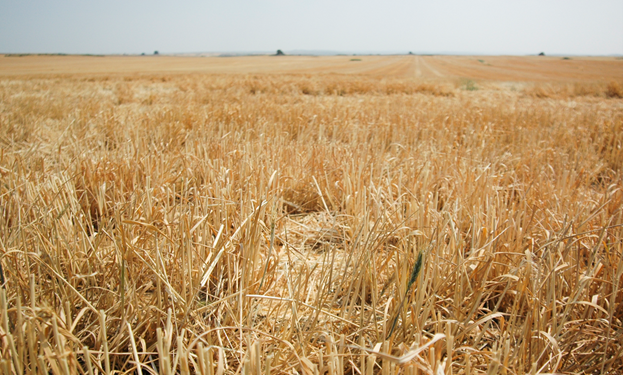 Last month, the U.S. Department of Agriculture (USDA) reported that U.S. winter wheat production will be down 8 percent in 2022, from 1.28 billion bushels in 2021 to 1.17 billion bushels expected this year amid drought in Kansas and other areas plus lower yields.

Adding to the misery, planting for spring wheat and durum is delayed the North Dakota Wheat Commission reported, via NDagconnection.com, on June 8: “this year producers continue to work on planting their wheat crops after a delayed start to planting and slow progress due to wet conditions, reports the North Dakota Wheat Commission… [S]ome fields are simply too wet to plant any crop and planting past June 10 or 15 is not an ideal option in an already short growing season.”

The lousy weather will almost certainly hurt yields, which are already down, according to the USDA’s May 12 press statement: “the U.S. yield is expected to average 47.9 bushels per acre, down 2.3 bushels from last year’s average of 50.2 bushels per acre.” That was the third consecutive year of declining yields, and they could not come at a worse time with the ongoing war in Ukraine, which combined with Russia was responsible for one-third of global wheat exports.

On May 11, President Joe Biden told the nation that U.S. farmers were “expanding production and feeding the world in need” this year, but it was all just happy talk. He vaguely offered crop insurance incentives to plant more. We didn’t.

In May, USDA had estimated that wheat planting nationwide would be up to 47 million acres planted this year, not a lot historically speaking. According to a March Department of Agriculture release on prospective plantings, 2022 will be the fifth lowest area planted since 1919: “All wheat planted area for 2022 is estimated at 47.4 million acres, up 1 percent from 2021. If realized, this represents the fifth lowest all wheat planted area since records began in 1919.”

The longer story here is that of globalization but also diversification of U.S. agriculture. The U.S. used to be the world’s breadbasket. Not so much, even with rising demand. The U.S. produces a little more than half of what it did in 1981, when it produced more than 75 million metric tons. That was down to 44.8 million in 2021.

And Russia won’t let the grain Ukraine produced out, with a naval blockade of Ukraine’s ports after taking over Mariupol in May, leaving 20 million tons of wheat apart from global supply chains.

On top of everything else, inflation isn’t helping. Producer prices for wheat by U.S. farmers are similarly adding to the drag, up 84 percent the last twelve months in April, according to data compiled by the Bureau of Labor Statistics.

Biden knew the costs of escalating the war and what he called the “price of sanctions.” On March 24, President Biden warned of global food shortages at the NATO summit in Brussels Belgium, stating: “With regard to food shortage, yes, we did talk about food shortages.  And — and it’s going to be real.  The price of these sanctions is not just imposed upon Russia, it’s imposed upon an awful lot of countries as well, including European countries and our country as well.  And — because both Russia and Ukraine have been the breadbasket of Europe in terms of wheat…”

This raises the question, what has the U.S. done to deescalate the war? Because despite Biden’s rosy projections of “expanding production,” we have not. This year’s winter wheat was too dry, and the spring wheat might be too wet in some areas. And we’re just not planting enough. Is the rest of the world just going to have to make due?

This post, U.S. spring wheat planting lags after winter wheat harvest down 8 percent in 2022 as world waits for Ukraine, was originally published on The Daily Torch and is republished here with permission. Please support their efforts.