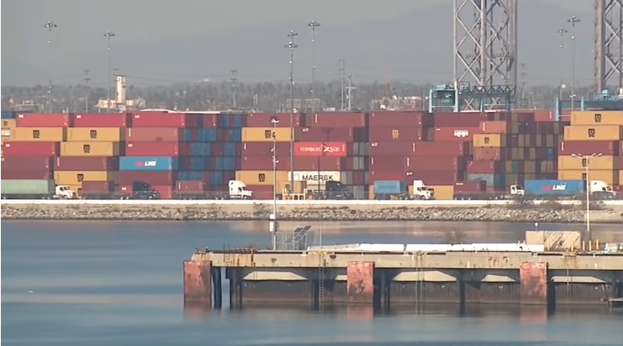 Earlier this week I was flying from San Francisco to Orange County, California.  Near the end of the short flight, I ​looked out the window and was able to count a minimum of twenty-five cargo ships anchored off of the Port of Long Beach.  These ships were almost all anchored with a couple moving into the clog.

Having not read about gridlock at the Ports of Los Angeles and Long Beach lately, I was somewhat shocked at what I was witnessing, particularly since I have been following the on-going labor negotiations between west coast dockworkers and the Port Authorities due to the devastating impact a strike would have on the already struggling Pacific Ocean ports. The good news is that workers are expected to remain on the job even if the July 1 contract deadline were to pass.

Even with this good news, incredibly a backlog still remains at our two busiest west coast ports in spite of Chinese government Covid-inspired shutdowns of many of their exporters, trucking inside China is significantly slowed and some factories are either shuttered or producing at less than full capacity, a backlog that could begin to worsen as factory restrictions begin to ease.

While not necessarily related to the ports, mothers are continuing to struggle finding baby formula in America with many resorting to crossing the southern border to purchase readily available formula in Mexico.   Apparently supply chain shortages for baby formula doesn’t exist south of the border, likely making the Biden administration the first in our history to force hungry Americans over the border in order to feed their children.

While flying out to California, the country’s air travel system was being racked by pilot and crew shortages. This leaves pilots stranded in towns with planes that they are not certified to fly to name one problem.  Who could have anticipated that when airlines were compelled to fire vaccine non-compliers that it would lead to disruptions in service almost a year later when the demand for air travel became robust?  Oh, just about everyone, that’s who.

And then we have President Biden’s attempt to blame oil companies for the high price of gasoline and diesel.  Rather than pointing fingers, the President might have looked at why refineries have been closing, even during the Trump years.

A July 2021 report by the Institute for Energy Research details a number of refinery closures across the United States due to a combination of cratered oil prices in 2019 and 2020, along with costly federal government mandates on renewable fuels. The report outlines the loss of more than 700,000 barrels per day in refining capacity over the past couple of years.  Many of these plants remain viable for reopening, but industry leaders are skeptical of opening new refineries.

Now, President Biden wants Congress to pass band-aid legislation to end the federal gas tax for three months, lowering the price at the pump by eighteen cents a gallon, while depriving the Highway Trust Fund of dollars to rebuild our nation’s highway and bridge infrastructure of one quarter of its annual gasoline tax revenue.

Each of the problems outlined above are in the solvable category, if the President wasn’t wed to the destructive green energy agenda: 1) Ending California’s truck restrictions which makes picking up containers from the ports much more expensive; 2) encouraging the re-opening of refineries and lifting all job-related firings related to not taking the Covid shot; and 3) turning the Defense Protection Act resources toward reopening currently closed refineries to increase domestic supplies of both diesel and regular gasoline.

Unfortunately, Biden is more interested in fuel posturing rather than actually increasing capacity, because his green transformation is dependent upon record high energy costs and broken supply chains. And that will be the Biden administration’s epitaph in history: A man dedicated to ending his nation’s economic health and prosperity.

This post, Why can’t Biden solve the supply crisis?, was originally published on The Daily Torch and is republished here with permission. Please support their efforts.