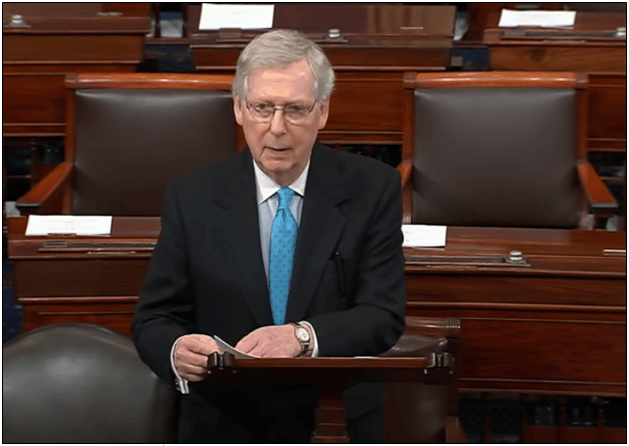 “I think there’s probably a greater likelihood the House flips than the Senate.”

That was Senate Minority Leader Mitch McConnell (R-Ky.) on Aug. 18 at the Northern Kentucky Chamber of Commerce, handicapping the Nov. 2022 Congressional midterms, giving Republicans greater odds to win back the House than the Senate.

But that would be true in any year. In midterm elections dating back to 1906 through 2018, the party that occupied the White House lost seats in the House 27 out of 30 times, or 90 percent of the time, with losses averaging 31 seats. The exceptions were 1934, 1998 and 2002, when the incumbent party was able to pick up seats in the House.

So, as a strict matter of probabilities and history, McConnell is correct, while Congressional midterms favor picking up seats in both the House and the Senate, the odds are definitely greater that the Republicans will be able to do so in the House.

McConnell attributed the difference in odds between the House and the Senate to Senate races’ statewide character and “candidate quality”: “Senate races are just different, they’re statewide. Candidate quality has a lot to do with the outcome.”

Here, McConnell appeared to be complaining about the slate of candidates that had been backed by former President Donald Trump in the Republican Party’s primaries this year, including Mehmet Oz in Pennsylvania, Herschel Walker in Georgia and J.D. Vance in Ohio.

That was certainly how former President Trump took it. On Truth Social on Aug. 20, Trump hit back, stating in part, “Why do Republicans Senators allow a broken down hack politician, Mitch McConnell, to openly disparage hard working Republican candidates for the United States Senate. This is such an affront to honor and to leadership. He should spend more time (and money!) helping them get elected…”

Here, Trump has got a point. Usually, opposition parties are able to capitalize on boosted enthusiasm of the party faithful in a midterm cycle, but if party leaders are undermining candidates publicly, a united front might begin to crumble.

In the meantime, the real reason it is relatively easier to pick up seats in the House in the midterms than in the Senate owes a lot to the fact every single seat nationally is up for grabs every two years in the House. Whereas in the Senate, much depends on which seats are up — by constitutional design, only one-third of the Senate comes up for election every two years — which can have a tremendous impact on the outcome in November.

The reason for the design by the Framers was to ensure that while the House would largely be in tune with the mood of the public every two years, two-thirds of the Senate is not up for election, insulating that body from sudden changes in the body politic.

In 2022, Republicans will be defending more seats than Democrats, 20 seats to 14 seats, including seats in Pennsylvania, Wisconsin, Ohio and North Carolina that are considered potential pickups for Democrats. Of the seats Democrats are defending, Georgia, Arizona, New Hampshire, Nevada and Colorado are thought be to be gettable by the GOP.

On one hand, with President Joe Biden with historically low approval ratings and the GOP with some momentum on its side, this might seem to be a good year for Republicans to be defending seats, because conditions mean it is more difficult to flip GOP seats this year. But with Democrats defending fewer seats, that also means there are relatively fewer opportunities for Republicans to pick up seats.

Were that situation reversed, Republicans would have perhaps have more of a margin for error in some of the Senate races.

Yes, many of these candidates got Trump’s endorsement, but they also got the votes of Republican Party voters who expect the party to do everything to win in November.

Now, it is up to McConnell — and also House Minority Leader Kevin McCarthy (R-Calif.) — to make both of those things work. Instead, if Republicans hope to win back both chambers of Congress this year, party leaders will almost certainly need to unite, especially now that the party’s primaries are largely over. Stay tuned.

This post, Yes, Senate Minority Leader McConnell, it’s harder to win the Senate than the House — but that’s always true, was originally published on The Daily Torch and is republished here with permission. Please support their efforts.